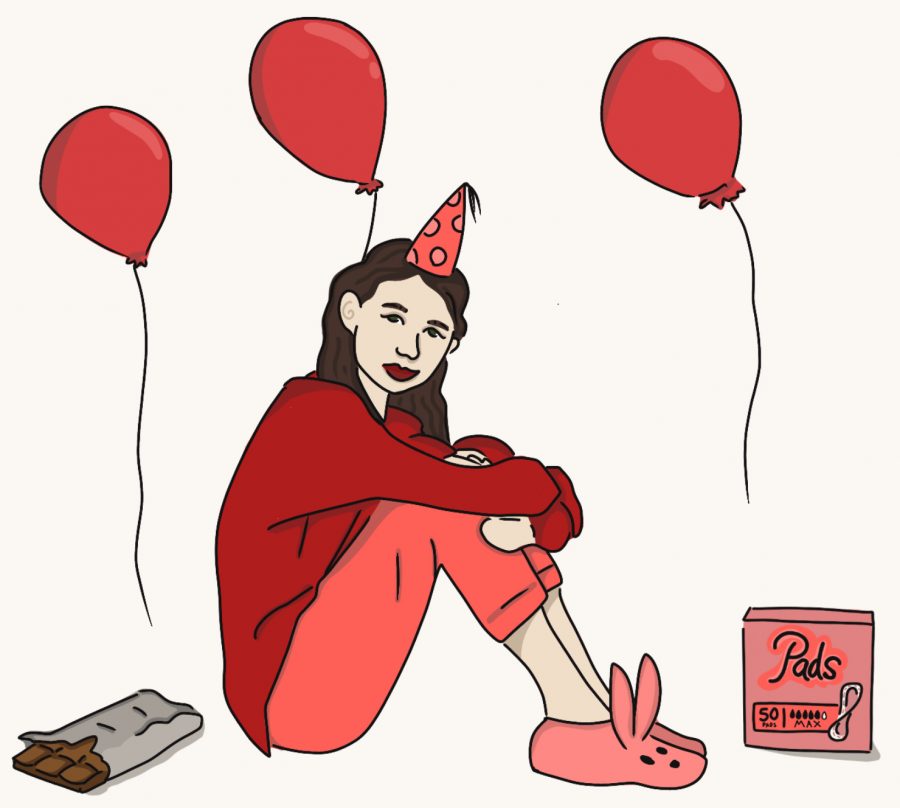 When I reached out last month, I hardly expected to get a response. I had forwarded bestselling author and feminist scholar Anita Diamant my book review of her 1997 novel The Red Tent. Lo and behold, she took kindly to it; the next thing that I knew, I was being mailed an advance reader’s edition of her unreleased book: Period. End of Sentence.: A New Chapter in the Fight for Menstrual Justice.

I finished this book in all of a few hours. When I started, I couldn’t stop. Period. End of Sentence. is an inspiring anthology of stories, experiences, and emotional sentiments that make up the difficult yet rewarding phenomenon known as menses. While there are infinitely “cutesy” ways to characterize – even euphemize – this term, which refers somewhat jarringly to the blood and other matter discharged from the uterus at menstruation, the most commonly used of them is “period.”

Notice how I used the word “jarringly” to refer to a natural life cycle. Menstrual blood is the only type of blood that is shed without conflict or violence, yet it is one at which we wince the most. Even I, a self-described feminist, make a painstaking effort to noiselessly remove the wrapper from a pad in a public bathroom. That’s why I find it so interesting that, out of all household nomenclatures and awkwardly endearing catchphrases, “period” is most prevalent. A period is a type of punctuation at its least interesting – a “mic drop” end to a conversation at its most. A quote from Melissa Berton, Founder of the Pad Project, producer of a related Oscar-winning Netflix documentary, and provider of this book’s foreword, best synthesizes the relationship between these contrasting definitions: “a period should end a sentence, not a girl’s education.”

Diamant seizes on these salient words, interweaving captivating narratives of people who menstruate all around the world to illustrate the pains and joys alike of bearing the ability to reproduce. Some are sobering, like when an Indian girl took her own life after being relentlessly bullied about a bloodstain on her pants, and others humorously uplifting, like when a group of middle-schoolers protested the lack of sanitary products in their bathrooms by baking cookies shaped like tampons. Diamant emphasizes the importance of reducing the societal stigma surrounding menses, citing celebratory ceremonies for rising menstruators in indigenous and foreign cultures (such as the Hupa tribe in northern California and the Kalashis in northern Pakistan) as paragons for how we should approach this rite of passage in our own communities. She even integrates a corporate lens, describing how big-tech pharmaceutical companies like Johnson & Johnson, Procter & Gamble, and Kimberly-Clark are rebranding their marketing to make menstruators more visible by introducing period-positive advertising and rolling out new, innovative products like Thinx underwear and Diva menstrual cups that help make the personal and environmental tolls of periods more manageable, as well as the need to abolish the levied “tampon tax” in 30 remaining states.

One anecdote from a Canadian Reddit user sticks with me to this day. When she was younger, the user bled through her skirt and chair at school, prompting her dad to come and pick her up. Instead of recoiling from uncharted territory, he stepped up, taking her to the store to buy pads and putting a few of them in the glove compartment of his car in case of emergency. Two decades later, the user’s in this same car when her period comes unexpectedly. She tells her dad, embarrassed, and he simply reaches over and opens the glove compartment, where the same pads still remain.

This father’s actions may not seem like a lot – in fact, they’re the bare minimum. But this is an example in which the bare minimum validated this woman’s very existence as a menstruator. By simply being prepared when his daughter needed him most, both times, this father extended something that seems, sadly, unthinkable in the context of a non-menstruator and a menstruator: empathy.

Just as a white person is not entitled to be taught black empathy, neither is a non-menstruator entitled to be taught period empathy. This is not to say that instruction isn’t key; however, it should come at the educational level. When learning about menses in a sexual education environment, menstruators and non-menstruators shouldn’t be segregated; though non-menstruators may not experience the same bodily functions as their menstruating counterparts, an integral part of the human experience is the ability to feel compassion for others’ experiences. A non-menstruator’s most powerful tool in their “fix-it”-oriented arsenal is the simple lending of their ear. Or maybe even an arm, since we’re all starved for human contact.

Anita Diamant’s Period. End of Sentence.: A New Chapter in the Fight for Menstrual Justice is not unlike The Red Tent. However, the former brings the implications of biblical feminist unity into the modern world. Many menstruators see themselves reflected in Dinah, reluctant to embark on a new adventure of womanhood yet excited about the possibilities and intensified connections that it will bring about. While Dinah’s entrance into the red tent is largely regarded as a relic of olden times, it can be likened to the newly popularized “period party,” complete with red balloons, mounds upon mounds of chocolate, and, for those who wish to really solidify the theme, a plate of tampon-resemblant cookies.