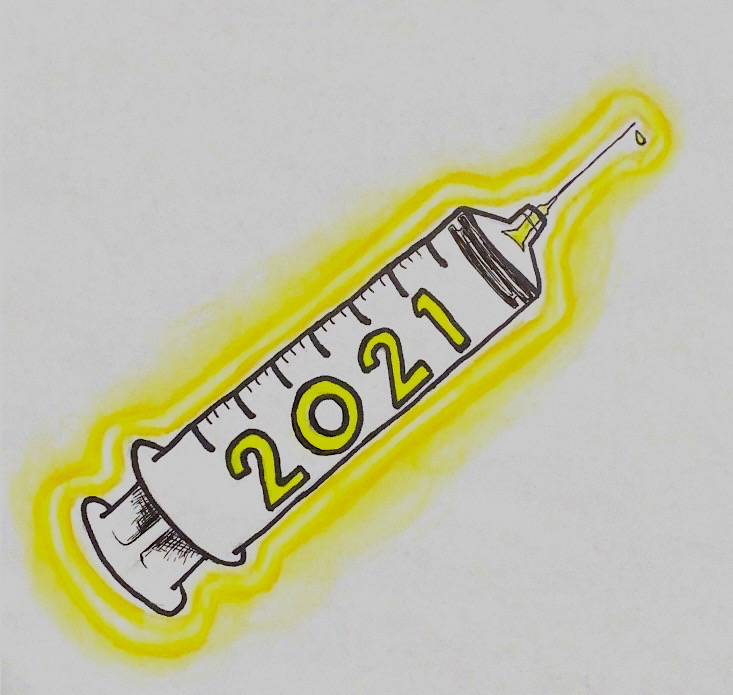 Some Jones students said they were “pleased” to hear the approved COVID-19 vaccine had a high efficacy, but were “concerned” that many people will act as if theapproved vaccine means that COVID is no longer a threat.

Pfzier, Moderna, and several other pharmaceutical com panies announced their vaccines had over a 90 percent effectiveness against COVID-19. Even though the vaccine has been deemed safe, The New York Times found 58 percent of people would take the vaccine in mid-November.
“I still feel very hesitant to get excited about it because so many times we have been told ‘this is the end we’ll be back in a couple months,’ and that just didn’t happen,” said Nina Hand ‘22.
According to the Centers for DiseaseControl and Prevention (CDC), COVID-19 has killed over 400,000 people in America alone since January 2020. Some have said it will be “difficult” to readjust to any kind of normalcy after so many lives have been lost.
“A lot of people are going to have t r o u b l e , including m y s e l f , readj u s t i n g to meeting people every day,” said Trey Tucker ‘24. “It’s going to be hard not wearing masks and being in rooms with people after we’ve been alone in our rooms for so long.”
Officials recommend everyone take the standard safety precautions until then. The country would need to reach herd immunity,meaning at least 60 percent of the population will have to have received the vaccine.

After being safely separated for so long, many people are eager to take the vaccine and immediately return to work and school. Despite wanting to return to “normalcy,”, some students and public officials said lockdown order should become even stricter now that a vaccine has been approved.
“I actually think we should be on a much stricter lockdown like than we are right now, especially if the vaccine comes out,” said Amanda Fanale ‘21.“People are going to be less cautious, which is why I think we need to have restrictions in place to make sure people understand that
it’s not a free for all afterwards,”

R e g a r d l e s s of concerns about the vaccine, this is still very important news for doctors and nurses who work with COVID patients every day.
“While it’s still being figured out step by step, it’s important to take the necessary precautions: to wear a mask, to not go to other people’s houses, etc.,” said Hand. “I definitely think that healthcare workers and essential workers should get it first.”

Along with healthcare workers, another group that has been disproportionately affected by COVID is students. Students, ranging from Pre-K to College, are losing the “normal” in-person education.
“I would prioritize having a shut down so that we can stop the spread of the virus, and the next thing would be to prioritize opening schools because that’s the most important thing right now to have open,” said Tucker.

Looking forward, the approved vaccine has given a lot of people a reason to be hopeful for the future. As exciting as the vaccine is for some, others are advocating that the country should stay cautious about the spread of COVID-19.

“The government should be very direct with us, tell us what’s going to happen, said Fanale. “And we have to follow along because,otherwise, we’re not going to get out of this.”