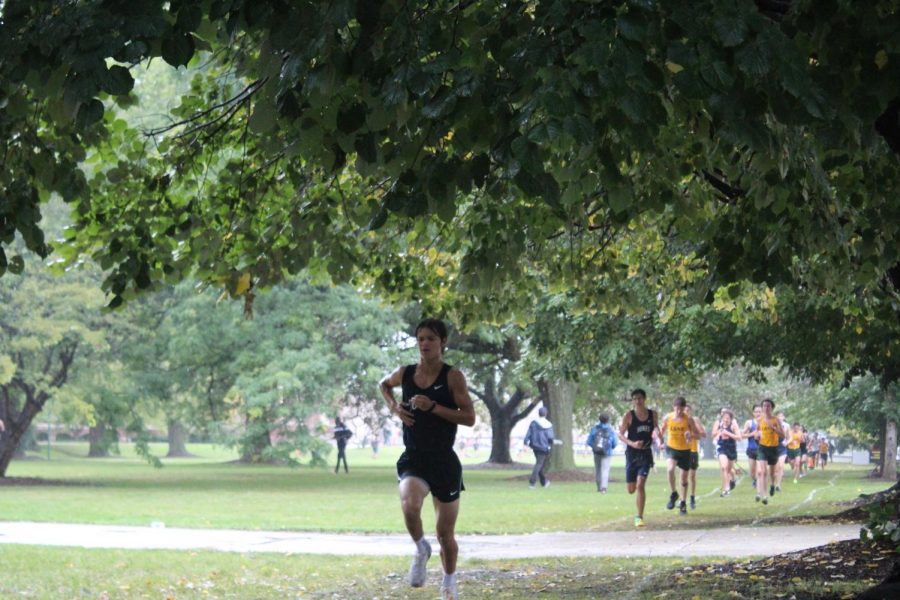 Joey Scalise ‘22 running in the rain during the second heat of the Varsity Race. Scalise finished in 12th place and ran a time of 18:22.4.

The Jones Eagles took to the course on Saturday Sept. 12 at Lane Tech, competing for the first time since Feb. due to the COVID-19 pandemic.

The first race of the day was the faster varsity heat of the boys three mile. The Eagles got out more conservatively with the rest of the field throughout the first mile.

Then, in the second mile, as a team, they started to pull away. The top Jones runners in the fast heat then executed in the third mile, winning the meet with five runners in the top seven and seven in the top 11, scoring just 21 points.

Leading the way for Jones was Aaron Hou ‘21, who came in first place by 14 seconds with a time of 16:08.5. Coming in third, fourth, and fifth were Luke Benes ‘21, Andy Niser ‘21 and Ethan Sterling ‘22, respectively. Rounding out the scoring for the Eagles was Ryan San Juan ‘21 who finished in seventh place.

Then, the two mile races occurred. In the first heat head Coach Andrew Adelmann ran just five runners- all which were freshmen. Andrew Nelson ‘24 led the way coming in first place, with Alex Leonard ‘24 not far behind in third. Sam Berlinghoff ‘24, Spencer Dixon ‘24 and Paxton Hengesbach ‘24 rounded out the top 5 to give Jones the win over Lane Tech by 8 points with a score of 21.

There were some strong races in the other three heats of the two mile to finish off the day for the Eagles. Although, none of those races turned into wins.

“It was good to just be back out here,” said Adelmann. “It has been a rough six months so the chance to come back out here (first time since March) and just do what we love to do is the big thing, so that is what we were looking for the most.”

A lot of runners stepped up in the first race for the Eagles. Most notably there were a few runners in the top heats of the two mile and three mile.

Even though the team did well throughout the different heats, Adelmann still believes that the runners need to work on finishing the race.

“We have got to do a better job finishing,” said Adelmann. “That will come, it’s our first race and first time over two miles, and we have got to build up some fitness.”

Helping with their success was the cross country teams’ training throughout quarantine over the past six months going back to March.

“It showed us how much our commitment and our diligence over the last half a year paid off,” said Hou. “I thought it was a good start, but there was definitely more to improve on as a team.”

Even with the win, improvements can still be made according to Hou as well.

“I thought we could have worked better as a team especially in the middle parts of the race, and there were some tactical things to fix, but it was a good foundation,” said Hou.

Overall, it was a good start to the season for the cross country team.

“My race was not perfect or anything, and I do not think anybody was really perfect, and I definitely think there was a lot we could have improved on,” said team Captain Ned Wojcik ‘21. “However, I think we went out there and just competed.”

The Eagles will compete again next week at the Whitney Young Invite on Saturday, Sep. 19.