Up in the air

Will student-staff basketball game be the school year’s last? 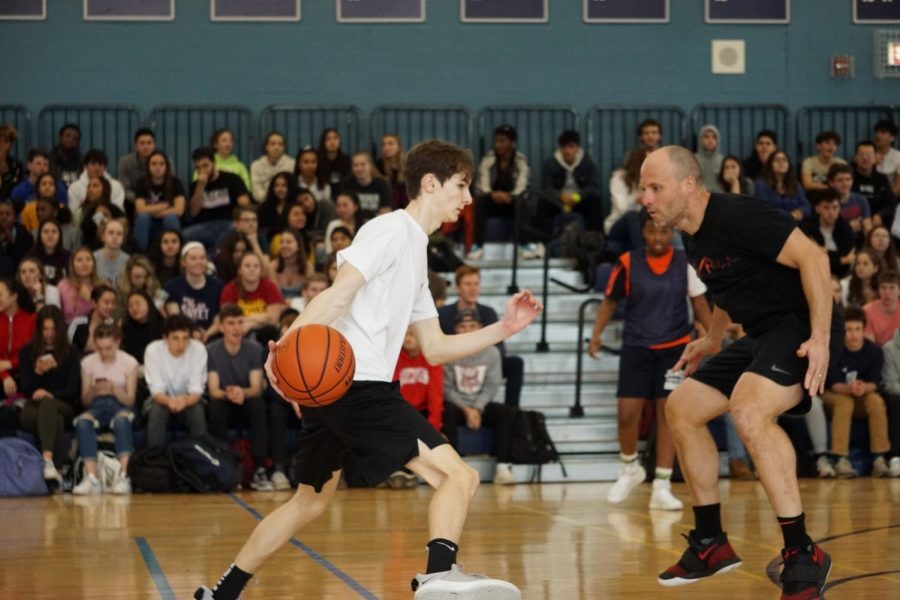 Unknowing of what was to occur in the days to come, Jones students packed into the gym on March 12 ready to watch the annual Student vs Teacher basketball game. With thoughts on coronavirus hanging just lightly in the air, no-one had any idea of the bleak future of Jones sports. The eventual postponement of all school sports and canceling of playoffs was devastating for all student-athletes, cutting the start/end of every team’s season. Although unaware at the time, the Student-teacher game would be the last Jones sports match for an unforeseeable future.

Prior to the game, students and teachers alike were excited for the competitive nature brought by the yearly tradition. Each year, the school’s student government sponsors the competition to raise money for their organization. Students show up to watch their teachers and peers flaunt their athletic abilities in a friendly game of basketball.

“I like playing against students I’ve had in the past and playing against current students,” said teacher team star player Jonathan Smith. “It’s usually pretty fun to see them in a different light and show that I’m also a human being outside of school.”

However, like any sports game, both teams wanted to win, badly. With a one year winning streak on the line, the teachers looked to defend their title leading up to the game.

As the game kicked off, the student team got off to a strong start. By the end of the first quarter, the score was 11-5 with the students on top. However, the teachers still managed to keep up with a strong start from Smith.

“[The teachers] were a pretty formidable opponent,” said Liam Meyering ‘20, a member of the student team. “I think Mr. Smith was a pretty good shooter.”

Going into the half, the game continued to be a back and forth affair. However, the Students nailed their shots when it counted and went into halftime with a commanding 19-11 lead.

“We were outplayed as a whole,” stated Smith. “After the first couple of plays we were tired.”

As the game proceeded, the students constantly held a lead, even with the teachers’ occasional hints at a comeback. Clutch threes from Chris Muller ‘21 and Rron Thaci ‘20 helped the Students maintain their lead through the end of the game.

“I was just trying to be saucy and put on a show for the fans,” said Chris Muller. “I was lights out from three, 4-4, and was kind of surprised myself.”

With a final score of 45-33, the students came out victorious over the teachers, ending the faculty’s hopes of back-to-back triumphs.

“The teachers were formidable enough for us to beat them by 12 points,” stated Meyering. “We’re going to beat them again next year.”

Just hours after the conclusion of the game, Chicago Public Schools (CPS) announced the suspension of all sports competitions and practices. It was only fitting that the last Jones sports match before months of anxiety and anticipation would be one of the most crowded and lively games of the year. With school spirit higher than ever and worries about coronavirus seemingly transparent, Jones was granted the opportunity to end their sports for the foreseeable future in one of the best ways possible.