A force to be reckoned with 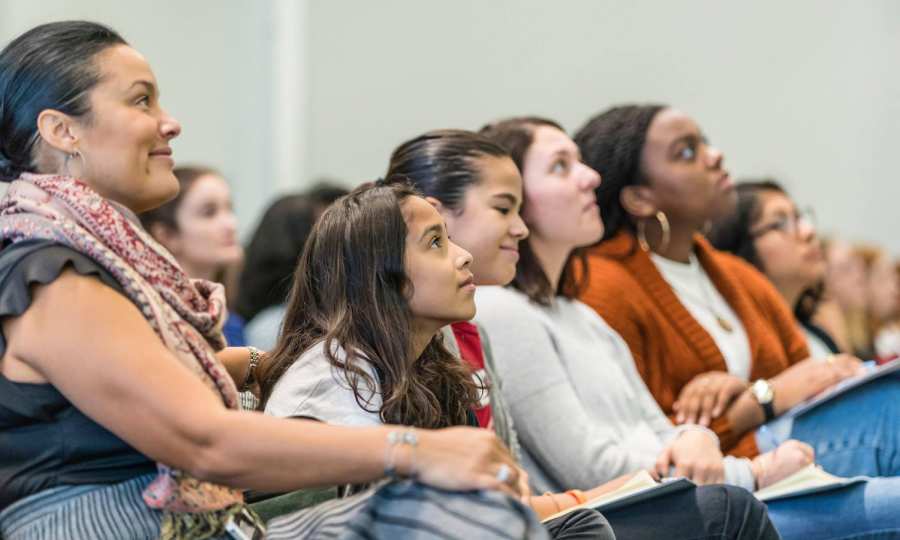 This aura permeated throughout the Motorola Mobility headquarters one early Saturday morning when hundreds of women from various parts of the Chicagoland area gathered to explore their feminism at the third annual Young Feminist Conference (YFC), an event organized by the political coalition Cause the Effect Chicago.

“It was a lot of fun to meet new people from all over the city and to make cool connections, as well as listen to all of the awesome performers,” said Zoe Weinstein ‘22, conference co-chair. “I met a lot of really interesting people and heard about new events and ideas that I wouldn’t have [heard about] otherwise.”

The conference rose to prominence in 2017 when Cook County Commissioner Bridget Gainer founded Cause the Effect Chicago and cultivated the common notion that women and girls should be empowered to enact change as activists and community leaders. Since then, YFC has become a foundation upon which women and girls have been able to galvanize action regarding issues of national importance such as domestic violence, gun control, and access to universal reproductive healthcare.

“[In 2017], I had just wrapped up working for Hillary Clinton’s presidential campaign in Wisconsin – particularly focusing on women’s outreach – an experience that made me feel like we still had a lot of work to do for women candidates to be given the credit they deserve,” said Meghan Christiansen, Executive Director of Cause the Effect Chicago. “On a personal level, my involvement in the conference makes me feel hopeful for the future of our country.”

The conference spanned a few hours in total, with special performances by speakers such as Eva Maria Lewis, co-founder of activist-centric organizations the I Project and Youth for Black Lives, Chazzie Grosshandler, teenage transgender-identifying founder of the GenderCool Project, and Chicago Youth Poet Laureate Penelope Alegria.

“I think the highlight of this year’s conference was the number of young women we were able to highlight as speakers and panelists. Young people are doing amazing things and taking on leadership roles around the issues that matter most to them, and I think that resonated with conference attendees,” said Christiansen.  “I would hope that attendees come away feeling empowered to effect change in their schools, neighborhoods, city, and beyond. Part of the strategy in featuring young women as the speakers was to show that ‘if they can do it, you can do it.’ ”

While the conference’s platform addressed young women, in particular, the event evoked emotional resonance within women of all ages. Liz Giese, a 67-year-old attendee, reflected on the intersectionality of her political endeavors as a progressive teenager in the mid-twentieth century and her ideals as a modern feminist.

“Growing up during the ‘second wave’ of the women’s movement, it’s distressing that many of the advances made are under such threat in the current political climate,” said Giese, “but I’m heartened by the bravery, determination, and strength of the young feminists that were in attendance at the conference. [Going forward], I’ll strive to support younger women in the workplace that [regularly] face gender and sexual harassment from very male-dominant professions.”

Despite differences in social backgrounds, conference attendees were united in the underlying belief that the power to inspire reform rests in the hands of current generations of young women. Christiansen, like many in attendance, was impressed by the work ethics of her young colleagues and the dedication that they put forth as a part of a global call for feminist action.

“My personal experiences from school, to sports, to working in the finance industry, [and] to working to elect the first woman president have shown that we still have a lot of work to do as a society and that we need to continue to speak out and demand more to achieve equality,” said Christiansen. “Since Trump was elected, so much I read and hear is disappointing and makes me feel like we’re devolving as a society, but then I have a meeting with young people, and I know there’s hope.”