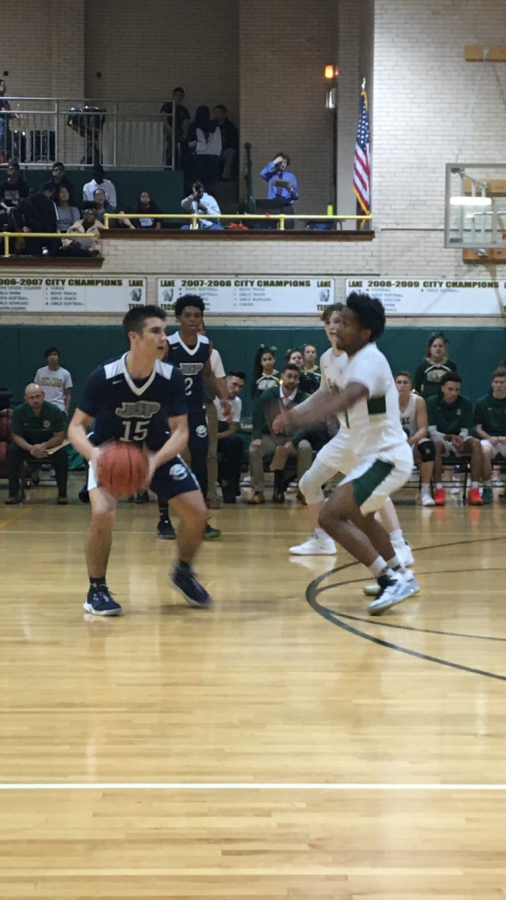 Niko Rosich ‘21 passes the ball at the top of the key.

In a game that was close throughout, the Jones boys basketball team could not overcome late free throws by the Lane Tech Indians and turnovers in the end in the loss.

Turnovers hurt the Eagles in the second quarter, when they struggled against Lane’s defense, only scoring five points during the entire quarter. However, the game was still within reach at half time, as they were down 27-20.

After the break, the Eagles battled back early in the third quarter to take a one point lead. However, Lane held the Eagles off, leading 34-30 entering the fourth quarter.

The Eagles began the fourth quarter troubling Lane with good defense allowing them to take a 43-39 lead with just four minutes left in the game. Lane crawled back in the game to tie the score towards the end of the fourth quarter. With about a minute left Lane ran out the clock to go for the last shot. With just seconds remaining, Lane missed the last shot and the game went into overtime with a score of 45-45 at the end of regulation.

A free throw gave Lane the lead early in overtime. However, Jones came back with a three-pointer made by Tommy Cleland ‘21, to take the lead 48-46. Lane bounced back to take a 50-48 lead with about a minute left. Then, a turnover leading to a flagrant foul allowed Lane to make two more free throws. The Eagles cut the lead to two again, but after another basket by Lane the game became out of reach for the Eagles. Ultimately, after some late baskets from Jones and free throws from Lane, the Eagles lost the game 58-54.

“I thought it was a very good very competitive high level contest,” said head coach Jarard Nathaniel. “I think both teams played really hard especially for this early in the season.” Lane’s free throw shooting helped them close out the game in overtime.

“Lane just made more clutch shots than us and definitely at the freethrow line, thats where they won the game against us,” said Nathaniel. “We missed some big time free throws and they made them when they stepped up.” In the close game too many turnovers also hurt the Eagles chances.

“We made a couple good plays at the end, but as a team we just have to get smarter if we want to win,” said Rron Thaci ‘20. “The biggest thing is just making the right plays.”

Despite the loss, the Eagles can take away several positives in the game.

“Defensively we’re one of the best teams generally I have seen in the past three or four years I have been here,” said Thaci. “Offensively we just have to communicate.” The offense did play better in the second half of the game, however.

“We got to keep our offense that was in the second half where we actually spaced and played together better,” said Nathaniel. “In the first half we tried to play hero ball and didn’t play as a team.”

Towards the end of the game, Jake Shulgasser ‘20 had to exit the game with an injury. The athletic trainer believes that it might be a sprain on his ACL.

“We are keeping our fingers crossed that it is nothing severe and he only has to miss the rest of this weekend and we can get him back going for conference next week,” said Nathaniel.

The 0-2 Eagles now look to pick up their first win on Wednesday against Lakeview.