Walking in instead of out 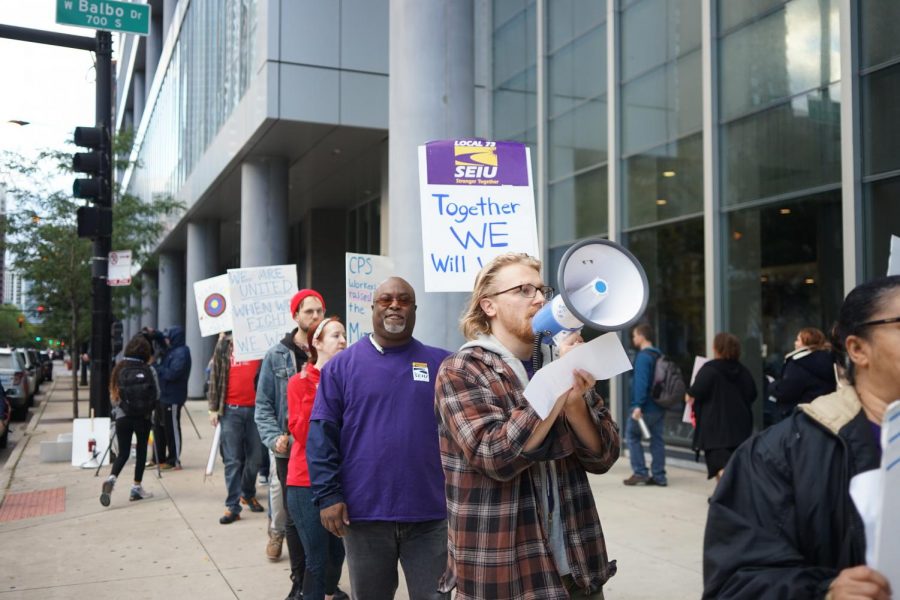 Around 30 Jones teachers and other faculty members arrived at the demonstration, which was considered a walk-in.

“It’s actually a joint action between the SEIU and CTU,” said Jones teacher and CTU representative Anthony Cappetta. “The CTU covers the teachers and some office staff, but the SEIU covers bus aides, security guards, janitors, [teacher’s aides] and other folks who run the school building. We’re really trying to draw attention to the fact we’re trying to negotiate contracts.”

As Jones is a selective enrollment high school, the school meets most of the demands for which the CTU is fighting in their contract.

“We have a social worker at our school; we have seven counselors and things like that; we don’t have class sizes of 40. It’s also the case that Jones is able to fundraise private money to make up for those things. If we didn’t have Friends of Jones, we would be facing some of these issues,” said Cappetta. “Across the district, these demands impact school communities, impact students [who have] come from schools who didn’t have nurses full-time and things like that.”

However, Jones’ privilege is not relatable for Ned Wozniak, who was also involved in the walk-in. Although Wozniak works at Suder Montessori as a Special Education Children’s Assistant (SECA), he is a part of the SEIU and was protesting in solidarity with Jones employees.

“We need to have a contract where [one job is enough] for people who work with the IS [Individual Services] needs students,” said Wozniak. “A majority of the people who are working with the IS needs students work second jobs. For the SEIU contract, we need better staffing, better training; we need respect on the job. Employees are treated as cheap; employees can fill holes in the school, but we are valuable parts of the school. We need full staffing to get kids what they need.”

In support of the SEIU, event organizer Malinda Bunniagh was ready with posters for the walk-in. Bunniagh helped the SEIU for over a year to fight for needs in their contract such as higher wages, safer schools, and getting rid of privately funded corporations like Sodexo and Aramark. In addition to schools, these corporations work in prisons.

“There’s also thinking about union contracts as an opportunity to talk about and raise issues [for what it] takes to make CPS better for students and communities across the city,” said Bunniagh. “It’s also about Sodexo and Aramark, who under-expects their work; [therefore,] schools have completely fallen apart. They need to go. We think that unarmed security guards play an important role in this school and should be able to be trained on restorative justice and be responsible adults that can work with children. We don’t need any more armed cops in schools.”

The walk-in ended with speeches from Cappetta and security guard Greg Lee. Despite separate needs, the unity of the red-shirt wearing CTU and the purple-shirt wearing SEIU is reflected by their collective impact on negotiation-related efforts.

“It is unconscionable that in the wealthiest country, in one of the wealthiest cities, we have class sizes of 40 kindergartners, 38 third graders across the city; it’s unconscionable that we have only a nurse one day a week at some schools,” said Cappetta. “Lincoln Park is now calling the ambulance to deal with basic injuries and things like this. This should not happen. This is why we’re out here. I hope that Lightfoot hears us, that she settles the contract without a strike.”

However, security guard Greg Lee addressed the issues on the behalf of the SEIU union during the speech.

“They can’t get a second job because there’s not enough time. But we have seekers who are forced to recess and do lunch duties and all other kinds of duties where they’re not dealing with the kids,” said Lee. “Take the bus aids with all of their downtime, put them into school, let them earn a decent wage, let everybody do the jobs that they were hired for. Get Aramark out of the school. They’re not bringing in decent wages. They’re taking the money for profit share. Get them out of schools!”

Despite separate needs, the unity of the red-shirt CTU and the purple-shirt SEIU is reflected by their collective impact on negotiation-related efforts.

“This year was different than we’ve done in the past because SEIU that actually organized the event,” said Jones teacher and CTU representative Mike Borge. “To do it alongside the part of the building that is not governed by the CTU contract but is in what really boils down to the same fight that we are in – that is new, and that I thought was great.”

As the CTU, SEIU, and Chicago Park Districts are working together, they have more strength in numbers.

“For Local 73 members, they have been invisible for a long time. This is the first time that their contract has linked up to the CTU contract. There’s this opportunity to fight side by side that hasn’t happened in the past,” said Bunnaigh. “I think that’s what has made this so unique because it’s not just the teachers now; it’s wall-to-wall in the schools. It’s also people [who work] with children in the parks. So, together, all of these adults and workers who are working with children across the city are saying, ‘No, this isn’t enough – we need better.’ ”