A tale of two trophies 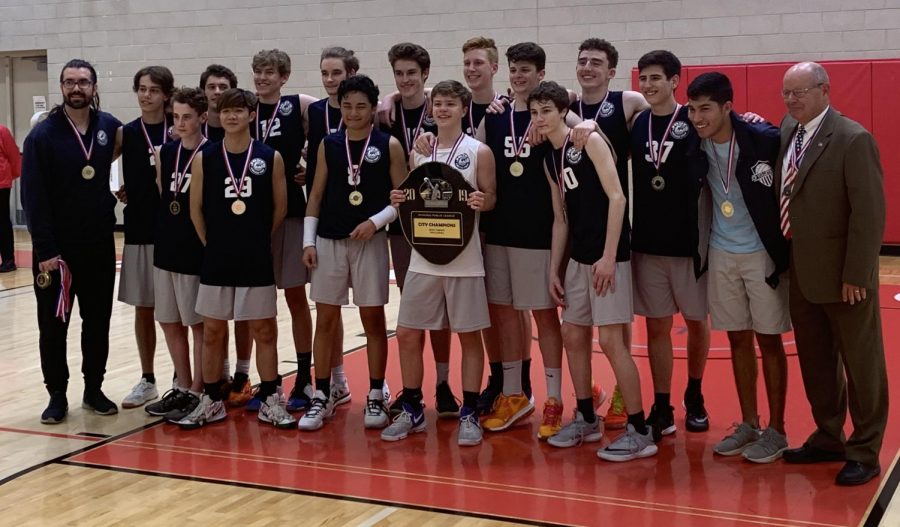 The Eagles raise the trophy for the first time in program history.

As great as a team can be, a championship never comes easy. All of the effort put in all season long comes down to one game where that effort is on full display. Pure emotion flows through the players and spills into the stands, which culminates to a perfect moment in sports as one team wins it all and the other is sent packing.

When Drew Burke’s ‘20 spike hit the gym floor at Malcolm X College to clinch the varsity city championship against Hancock on Thursday night, that perfect moment was achieved.

The varsity title game featured an MVP-esque performance from star Henry Van Zytveld ‘19, who is one of few players that has given the volleyball program countless hours to make it to this point.

“This was the climax of four years. To achieve it was really rewarding, especially for people that have been in the program for so long,” said Van Zytveld.

The junior varsity squad also captured a city title against Hancock on Thursday, showing the rest of CPS that Jones will continue to be a powerhouse for years to come.

The JV Eagles played in the first game of the night and struggled right out of the gate. Even with a strong comeback toward the end of the first set, Hancock, who also call themselves the Eagles, put Jones away late 25-23.

The second set was also extremely close, but Jones came out on top 25-23 to force a third game. Hancock seemed to be running on fumes during the third frame as their mental mistakes began to pile up, allowing Jones to escape with the championship 25-11.

“It feels great to have all of that hard work pay off, but this was expected,” said Emerson Hachinski ‘21. “We breed winners at Jones.”

The varsity game began next, and it followed a much different tone than the JV matchup. Jones came out dominating in the first set behind huge surges of momentum. Jack Brooks ‘19 set up big men Burke, Van Zytveld, and Nic Iturralde ‘19 perfectly during the whole set, leading them to a crushing victory 25-14.

Many Eagles fans expected the same type of blowout as the teams switched sides, but that type of one-sided affair was never seen again. The second set was a battle, with Jones down 16-10 at a point. A comeback looked to be in store, but Hancock slammed the door before it got too close, escaping 25-22.

After a disappointing second set, the Eagles came out fighting to stay in the game and gain some momentum back. After keeping it close for the first half of the set, Jones powered ahead 24-16 before a late Hancock comeback made it interesting at 24-20. Coach Jake Myers called a timeout to calm the nerves, and Jones came right back out and finished the job in one play.

Especially during the third set of the varsity game, the gym was in a frenzy. Constant uproar after every point scored from either side only increased the pressure and gave the game an intensity that is rarely seen at any type of Jones sporting event.

These are the first boys volleyball city championships in Jones’s history, a feat that puts this year’s program in the history books.

The varsity Eagles will begin the state playoffs in the coming days, while JV ends their year on a victory. The state playoffs will give Hancock a chance to exact revenge on Jones, as a potential matchup in the regional final seems imminent.