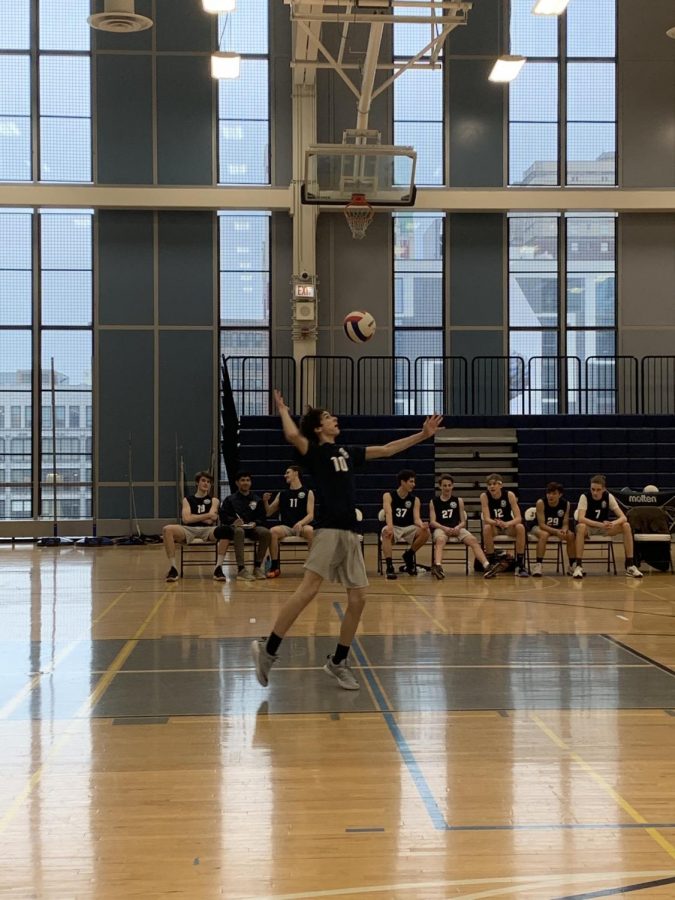 Murray sets up to serve during the Eagles' commanding second set.

The Eagles started off the season on the right foot Wednesday night, putting one in the win column as they dominated Juarez in a two-set sweep.

Jones had the height advantage in this one, allowing them to hit over Juarez and block almost every spike that came their way. The tall trio of Henry Van Zytveld ‘19, Deimantas Gilys ‘20, and Drew Burke ‘20 proved to be menacing, setting up what looks to be a promising season.

The Eagles have a lot of hard hitters, a good quality to have on a team to keep the momentum going one way, an element that was on showcase in the season opener.

Tommy Murray ‘20 said, “All the guys are excited to be back. The team is looking good this year.”

Jones didn’t let either set get close, giving up only 13 in the first and 14 in the second. Juarez, who also claims the Eagles as their mascot, was never able to pick up momentum and contend with the home team.

The junior varsity squad also faced off against Juarez, picking up a two-set victory in similar fashion.

“I do think we have a great team this year and a good chance to win [The] City [Championship],” said Adrian Gomez ‘19, the varsity team manager. “We have a lot of raw talent. It will be interesting to watch.”

Jones will continue their season on Sat., Mar. 23 at the Westinghouse Warrior Invite against Lindblom, looking to turn the victory against Juarez into the start of a winning streak.