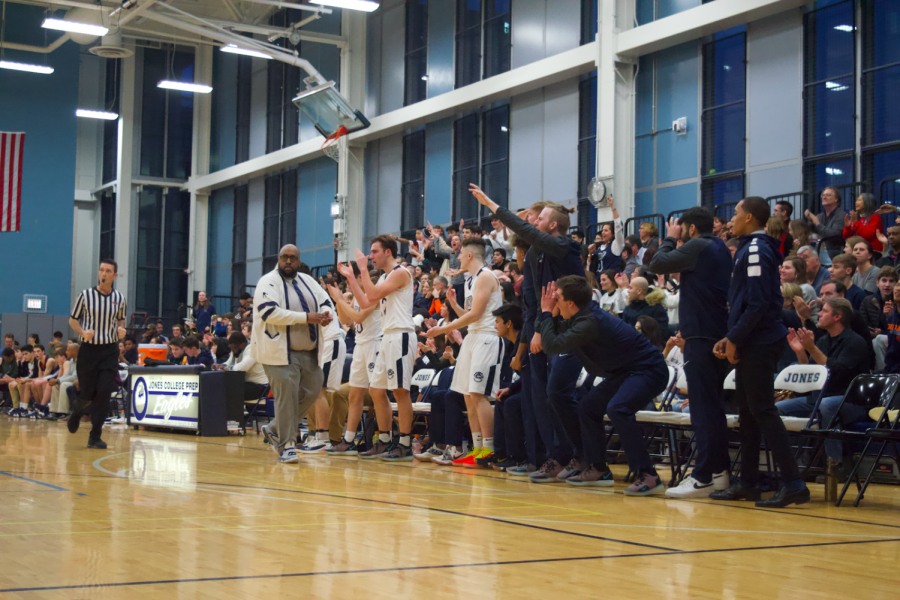 The bench celebrates as Jones tries to cut the deficit

The Jones Eagles were stopped in their tracks by the Payton Grizzlies on Friday’s senior night despite playing in front of the largest crowd the Eagle’s Nest has seen this year.

The gym was packed to beyond capacity, forcing dozens of temporary seats to be installed minutes before tipoff.

“It felt great to have the crowd there to back us up,” said Luke Warda ‘20.

Senior night at Jones was something special: the lights were bright, the stands were packed without a seat to spare, and for one night, the entire school stood behind a group of six seniors that has left an immense impact on the Eagle basketball program. Although suffering a loss against an impressive Grizzlies squad (8-1 in conference play), the Eagles still celebrated their seniors who have given countless hours to their family that is Jones basketball.

Sam Marco, Stefan Rosich, Sam Cherici, Alex Andrade, Patrick Mattar, and Nordmark will all be graduating this upcoming June, leaving the Eagles to find a new source of leadership for next season.

As the game began, nervous energy spilled all over the court, resulting in sloppy play from the Eagles early.

With Payton building momentum and gaining an early lead, coach Jarard Nathaniel elected not to take a timeout early in the first quarter. The Eagles would never cut the deficit for the rest of the game.

Defense was the sole difference maker in the contest. The Eagles’ weak zone gifted the Grizzlies countless open perimeter looks while Payton’s gritty man-to-man stymied Jones’ offensive attempts. Jones made a late push to cut it closer than it was, finishing with a final score of 58-51.

All season the Eagles have relied on momentum from the crowd at home. While it was present during the contest, Jones was never able to get things going and keep the momentum going one way, and the crowd never got into a groove.

Jones is still in the CPS Consolation Playoffs and will play in the semi-finals against Phillips tomorrow, Feb. 16, at Quest.