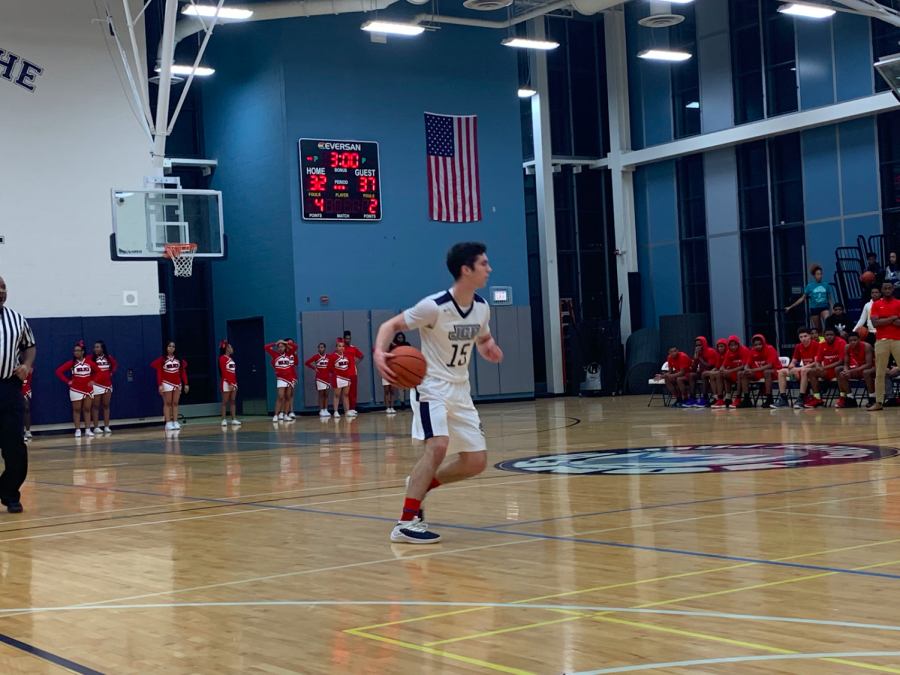 Rosich added 12 points and five rebounds of his own while propelling the Eagles in the second half.

The Jones Eagles secured a key playoff win on Thursday night, defeating the Perspectives Wolves to advance to the third round of the CPS Consolation Playoffs.

“We came out of the gates in the first quarter with the sense that we were gonna beat them and we played really soft,” said Patrick Mattar ‘19, who provided valuable minutes off of the bench.

However, a late push in the third quarter by the Eagles, led by Stefan Rosich ‘19, gave them a four point advantage with one quarter to go. Rosich finished with 12 points and five rebounds, while his teammate Rron Thaci led the team with 17 points and 11 boards.

Mattar also said, “In the final three quarters we played more as a group and swung the ball around the key, and it led to a lot more buckets.”

Coach Jarard Nathaniel rewrote the script in the locker room at halftime, trying to change things up.

Sam Marco ‘19 conveyed the message Nathaniel said to them at the break, “He said the first two quarters we just weren’t playing hard and that we were running slow. He wanted us to play as a unit, and that’s what we did. It was a game changer.”

The Eagles’ Nest continues to be a tough place to play on the road. Despite a seemingly small crowd in the stands, slamming of the bleachers, constant chants, and a certain energy pumped the gym, which in turn intensified every possession on both sides of the court.

“[The energy] helps us on offense and defense. It pushes us to execute and play harder.” said Alex Andrade ‘19, who added four points and four rebounds in the victory.

A series of missed free throws from the Wolves plagued their late-game comeback chances, building up frustration. With the game seemingly in hand with 42.5 seconds remaining, tempers flared between both teams resulting in a double technical being handed out by the officials. Rosich knocked down both technical free throws, which earned a standing ovation from the bleachers, effectively sealing the game.

The Eagles’ next game is Sat., Feb. 9, against Stagg in the Homewood-Flossmoor Shootout while the CPS Consolation Playoffs are set to continue.