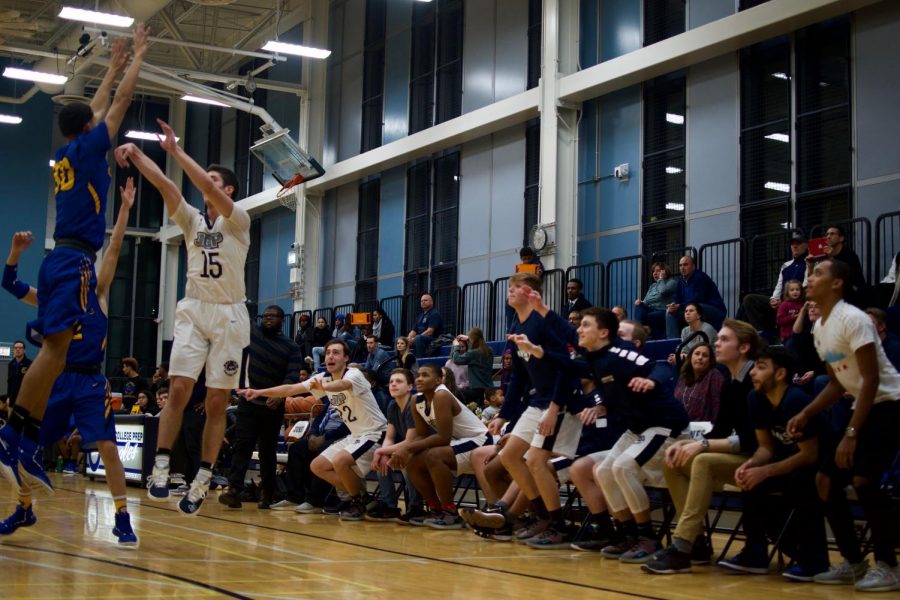 It takes a team: Energy off the bench controlled the game and electrified Rosich’s performance.

Suffocating defense and fast paced basketball was the name of the game on Friday, Jan. 11, as the Eagles downed the Roberto Clemente Wildcats 64-53 behind Stefan Rosich ‘19 and his 28 points, six rebounds, and five assists.

“Once we got our defense and rebounding going, we got out to a huge lead,” said Rosich after the game.

Despite playing to a mostly full house, the normal Eagle’s Nest energy wasn’t present for most of the game. The constant whistles and turnovers left many home fans losing interest quick and many leaving at halftime. Foul calls plagued the first half especially, with both benches often rising up in protest of multiple whistles throughout the game.

However, the energy had to come from somewhere, and the bench played a huge role, especially to Rosich.

“The whole time I heard them yelling and screaming on the bench, I hope we can get that every game.”

The Eagles stuck with a half court trap on defense for most of the game, a set that gave up only two points to the Wildcats in the third quarter and presented Jones with many fastbreak opportunities.

Jones’s second half play was much smoother than it was in the first, which was riddled with anxious turnovers and frustrating foul calls for both squads.

“Our defense improved, our scoring improved, and then the game got out of hand. Alex [Andrade ‘19] started pressuring the ball up top, and we beat them on both sides, especially in the third quarter,” said Rosich.

A scoring explosion from Rosich didn’t only mean a lot to him, but to his teammates as well.

“It’s big. Stef is our floor general. When he goes off, it makes the game a lot easier for everybody else,” said Andrade, who also added six points and three rebounds.

Usual starting forward Grant Nordmark ‘19 sat out tonight with an ankle injury, being replaced by Sam Chierici ‘19, who provided tough defense and a strong post presence.

The Eagles also chose tonight to debut their new home jerseys with a somewhat mixed response from the players.

“They’re pretty sick,” said Chierici. On the other hand, teammate Andrade did not want to comment on the new home uniforms.

The Eagles now stand at 10-6 overall and 4-1 in conference play. They face Ignatius College Prep on Saturday, January 12 and their next home game is Friday, January 18 against Douglass High School.