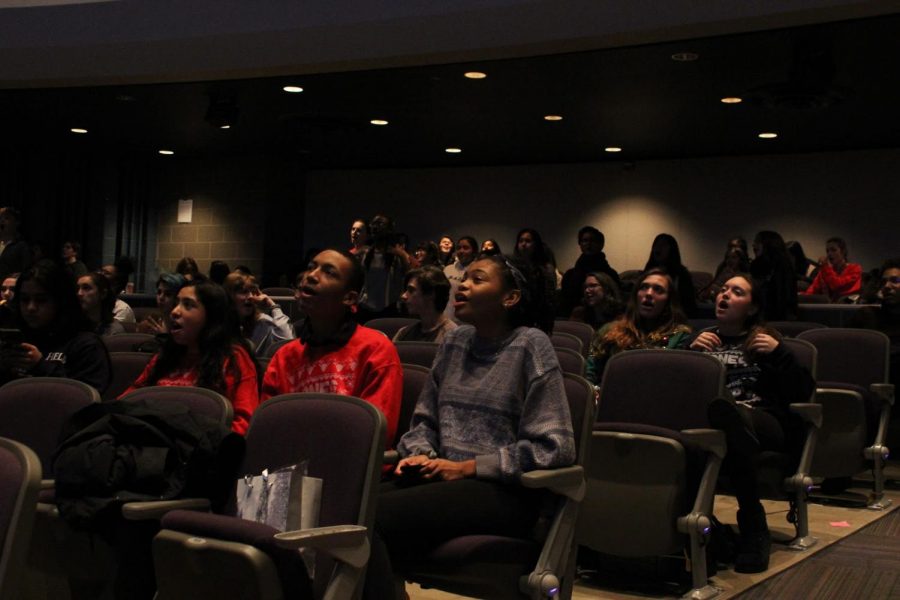 Choir students could be heard singing Holiday songs and 80s classics such as "Take on Me" by the Baha Men and "Uptown Girl" by Billy Joel.

In place of their traditional holiday concert, Jones Choir hosted their first annual Holiday Sing-Along in the Robin Bennett Theater on Dec. 20.

“We’re doing our traditional concert in January because there’s already so much going on in December,” said Katie Colby, Jones Choir Director. “The last thing Jones kids need is another event coming up.”

In addition to reducing student pressure, Colby decided on a date change to eliminate the holiday aspect of the winter concert.

“I wanted to get away from it feeling like a Christmas concert, because that’s not reflective of our student body,” said Colby.

Colby’s sentiments were shared by choir student Haley Sorkin ‘21. The sing-along, said Sorkin, was a great opportunity to relax and do some fundraising.

“Having a sing-along is less pressure, and the concessions raised money for us to go to New York,” said Sorkin.

Although the sing-along is the new holiday choir event, the winter concert will still be taking place after winter break.

“We will do a big, formal concert, but it’s going to be on January 17th instead,” said Colby.

At the sing-along, students enjoyed rocking out to songs like “Dancing Queen,” by ABBA, and “Let It Go,” by Idina Menzel from the movie Frozen.

“My favorite song was ‘Let It Go’ because everyone was so excited to sing it,” said Sorkin.

After putting time and effort into preparing the sing-along, Sorkin said she felt happy with the end result.

“The vibe was energetic and fun, which was awesome because we put a lot of work into it.”

Tatiana Bustos ‘20, a member of Jones Choir since her freshman year, was happy with schedule change for the winter concert.

“I think that the winter concert being moved to January will do a better job of including parents, since the Sing-Along was targeting students,” said Bustos.

“The winter concert will be much more formal, but students should definitely still come!”

Colby hopes that by starting an annual tradition, the rest of Jones will become more involved in the world of choir.

“We keep hearing community a lot when we’re at staff meetings,” said Colby.

“I thought this was one thing that choir could do to invite the rest of Jones to be part of our community.”

While the holiday activities may be over for this year, Bustos expressed excitement and some expectations for Sing-Alongs to come.

“Next year I think the Sing-Along should have more holiday songs than pop songs, especially since it’s a festive time of year,” said Bustos.

“It was really exciting to help plan this one, and I think it will be a great fundraiser for the coming years.”