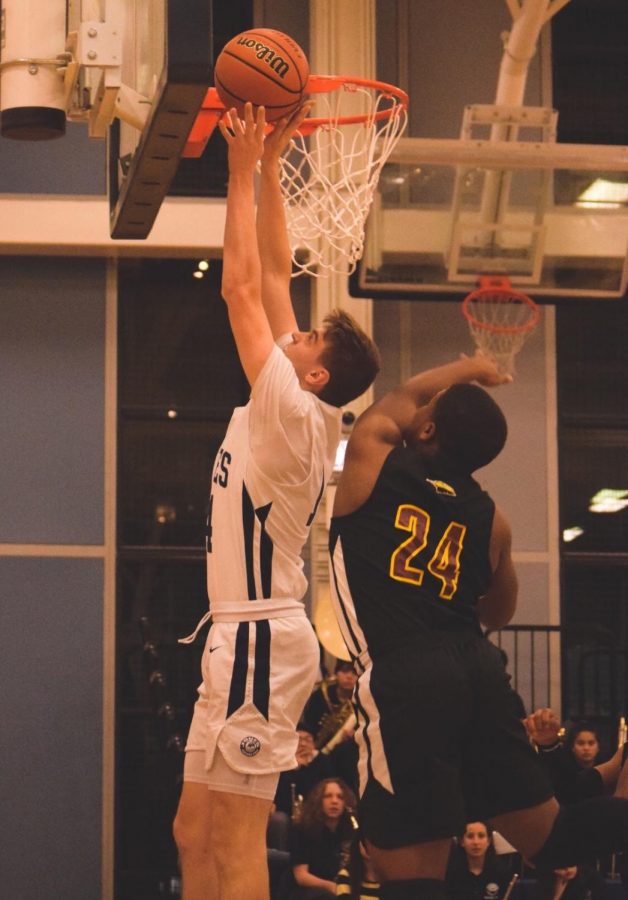 Rron Thaci ´20 draws contact and finishes the basket to get the crowd on their feet.

Feeding off of the strong home crowd, the Jones Eagles came right out of the gate to beat the Solorio Sun Warriors 73-47 on Tuesday in their first home game of the basketball season.

Jones leaped ahead in the first quarter with a commanding 21-8 lead.

Rron Thaci ‘20 got off to a hot start with 8 points in the first quarter and 20 by the final buzzer.

The Eagles kept their advantage in the second quarter, leading the Sun Warriors 37-23 at the half.

Jones’ ball movement and communication on defense were key in securing the lead in the first two quarters of play.

A combination of easy fast breaks and three-pointers for the home team extended the score to 61-28 after the third quarter.

With such a lead, the Eagle players began to take—and make—deeper shots and tougher layups, much to the delight of the fans.

For most of the fourth quarter, Coach Jarard Nathaniel sent out his role players to close the job, finishing the game with a winning score of 73-47.

“Morale is high, but that’s what happens when you win,” Nathaniel said after the game. “The key is to keep it going and keep it up no matter what happens.”

After three wins in a row, the energy in the locker room is buzzing, Alex Andrade ’19 said.

“We’re feeling great,” said Andrade. “We’re moving the ball, playing good defense and working on what we need to work on.”

The Eagles will play an away game against the Marist RedHawks on Thursday, November 29 as they try to extend their win streak to four in a row.