Gave it their all

Women’s XC battle through postseason after shortcomings at City Championships 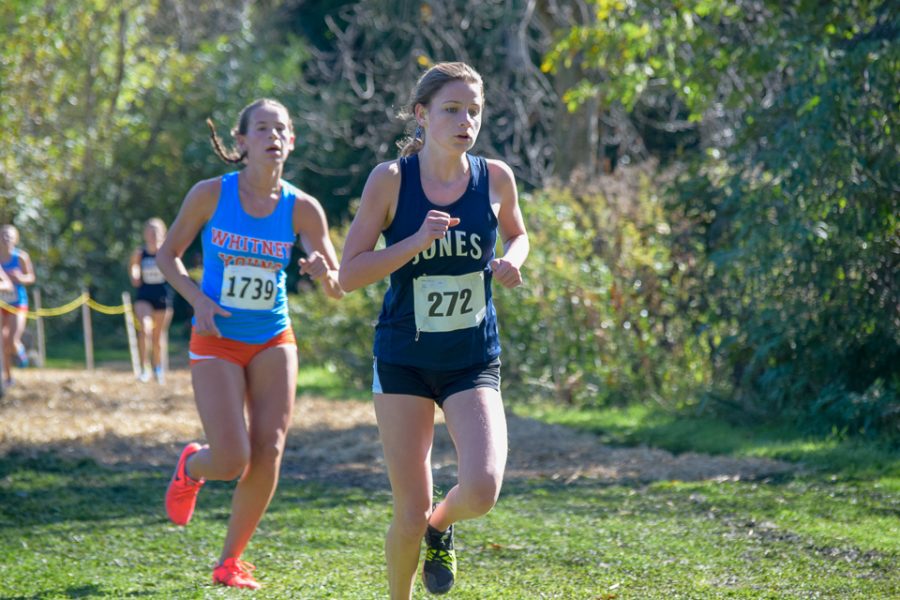 The team’s top runner, Julia Benes ‘21, leading the team through her last half of the race.

As the women’s cross country team returned to the damp, chilly weather of Washington Park for another run for a podium finish, they fell short of expectations at City Championships on Oct. 13, finishing 5th on the varsity level. These next few weeks will be their last chance to extend their season as they continue through the championship weeks.

Looking back at results from city, they came short of expectations where they were looking forward to be in the mix of the 3rd and 4th place. The difference between 3rd through 5th place was a slim 18 points.

“Our #1 runner is a sophomore, she finished 8th,” said Coach Sarah Reynolds at the City Championships.

Another top finish was Laura Davolo ‘19, who ran a 13:55 two mile, a seasonal best for her team. Many athletes also ran personal bests, especially at the freshmen level, where they showed a very competitive spirit in this race.

In their active roster this season, most of the depth will be in their sophomores and juniors which includes varsity sophomores Julia Benes ‘21 and Dorothy Harbaugh ‘21 according to Reynolds. They lost a lot of senior leadership from last year and will have to rely on captains such as Julia Ross ‘19 to step up for the team. Another notable player on varsity is Anika Brennan ‘19, who qualified as an individual for the IHSA State Championships last year and will have to step up her times in order to qualify again this year.

“Everyone’s gonna have to run their best race on exactly the same day.” said Reynolds.

The team accomplished seasonal bests that weekend according to Reynolds and will have a harder competition to face this year to make it to state. In their regionals conference, they faced rival city teams such as Whitney Young, Lane Tech, Payton, and Von Steuben, where they placed 5th, with 142 points. Among them was Julia Benes ‘21 and Katie Murray ‘20, who placed 13th and 27th respectively.

Their placement advances them forward to Skokie Niles West Sectional this weekend, joining the men’s team to give them a run toward the state series. The athletes to look out for on Saturday morning will be Julia Benes ‘21, Katie Murray ‘20, Anika Brennan ‘19, Dorothy Harbaugh ‘21, Madison Barrera ‘19, Julia Ross ‘19, and Ava Schroeder ‘20.