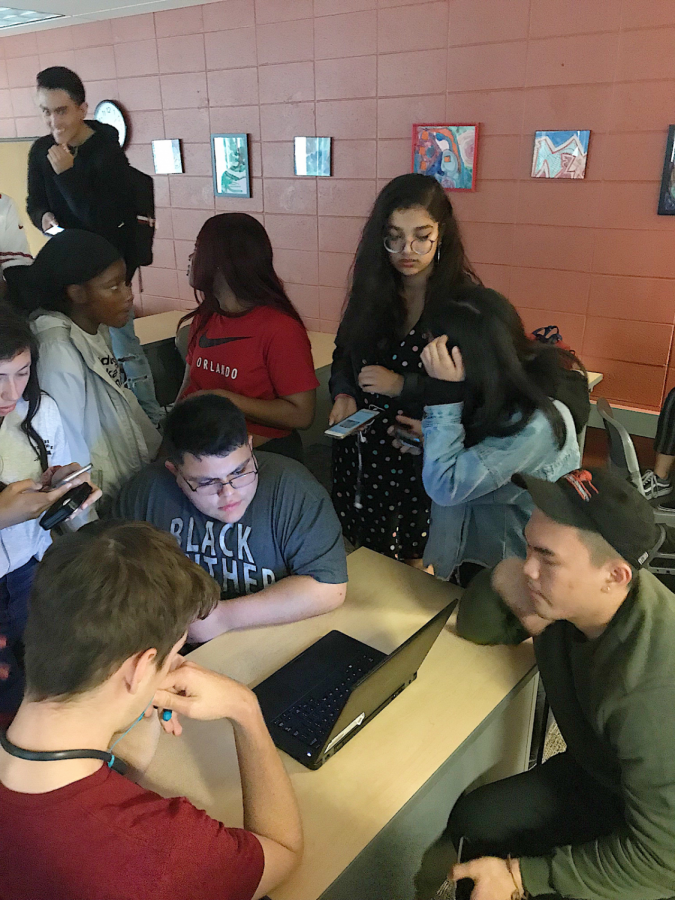 Sarika Doppalapudi ‘19, Julian Gama ‘19 Justin Yu ‘19, Mauricio Gonzalez ‘19, and other students watch the reading of the verdict during Eagle Lab.

As students tuned into livestreams and refreshed online news updates on Friday, former Chicago police officer Jason Van Dyke was found guilty of second-degree murder and 16 counts of aggravated battery; one count for each shot that he fired at 17-year-old Laquan McDonald in October 2014.

“I think that the verdict was the right one. I think recognizing each shot as a crime did a wonderful job of magnifying the inhumanity of the situation,” said Lauryn Schweickart ‘19. “I think it sends a really powerful message that law enforcement is not exempt from prosecution just because of their occupation.”

Some students are hopeful that the verdict can begin to mend police-community relations in Chicago.

“There’s hope for the city [because] they convicted him,” said Adam Ziegelmueller ‘22. “I do believe that it could have been harsher, but it wasn’t and I guess we have to live with that.”

According to a survey sent on Friday that 189 students answered, almost 83 percent of students approved of the verdict overall. However, over 85 percent of students disagreed with the jury’s decision to find Van Dyke not guilty of official misconduct, and 57 percent thought that he should have been convicted of first-degree murder.

“Jason Van Dyke knew what he was going to do when he arrived at the scene: kill Laquan McDonald,” said Elisa Almanza ‘20. “Firing 16 shots after immediately arriving [at] the scene isn’t fear, it is murder. He is a murderer.”

Unlike first-degree murder, second-degree murder has certain mitigating circumstances: impulsive action due to provocation; or belief that the murder would have been legally justified, such as in an instance of self-defense. (There is no premeditation statute in Illinois.)

“[What makes this] second-degree murder is that Jason Van Dyke believed that what he was doing was the right thing to do,” said law teacher Emlyn Ricketts. “[But] that belief and that fear for his life was unreasonable.”

Although the majority of Jones students support a first-degree conviction and condemn the actions of Van Dyke, there are still some that encourage sympathy for him and his family.

“I think Van Dyke was startled and acted impulsively and very inappropriately, [but] I do [think] he definitely regrets his decisions,” Abram Gallegos ‘19 said. “We should find more change in Chicago and not more prisoners. He is getting the [verdict] he deserves but I am tired of people telling him to rot in prison.”

“In a few classes, we were asked to talk about it, and some students were saying things like, ‘cops are complex’ or ‘this is just one cop’ or ‘cops do good things’, which is valid, but I don’t think that’s what we should be talking about,” said Maia Cho ‘19. “Jones students often [come] from this place of privilege. We have to remember that most of the world supports cops, so we need to talk about how to fix these systems of police brutality.”

To prepare for the verdict reading, the Chicago Police Department deployed officers in 12-hour shifts around the city. Jones invited the several officers in the South Loop to utilize the school building for their breaks.

However, with more police officers and squad cars scattered around the perimeter of Jones, some feel that the security measures may have been too extreme.

“I don’t think the way [CPD] handled the safety measures surrounding potential riots was effective,” said Caelen Reeves ‘20. “It did a lot of harm to the mental states of students in communities with already high police presences.”

Others believe the increased police presence at Jones may also exhibit underlying racial tensions in the city.

“The fear-mongering that took place surrounding any possible protests was blatantly racist,” said Gwen Richter ‘19. “The fact that the media and the city vilified black anger to the point where whole buildings were evacuated under the guise of ‘safety concerns’ only furthers the idea that black Chicagoans are seen as ‘trouble’ for the city.”

According to administration, increased security is necessary to ensure that students are not caught in a potentially dangerous situation.

“The additional officers were here to ensure all of us would be safe in case of any civil disturbance in the wake of the Van Dyke trial verdict,” Powers said.

The cancellation of the homecoming dance and after-school activities due to safety concerns prompted disappointment from some students. However, others feel that this was a trivial consequence and should not detract from the importance of the trial.

“If you have any kind of respect for black people, please do not complain about homecoming being postponed,” said Mimi Dibissa ‘20.

McDonald’s death, at the forefront of a national debate over police brutality, led to divisive public outrage. Some students are skeptical of the satisfaction with the verdict and instead hope for broader systemic change.

“Although the conviction of Van Dyke is a win for the community of people that have been advocating for the accountability of police forces in instances of police brutality,” said Izabella Rettke ‘21, “the fact that the trial took four years to produce a verdict and ended in only a second-degree murder conviction speaks volumes about the lengths we still have to go.”

Amidst fears that Van Dyke may have been acquitted, many were relieved that he was convicted of murder. However, some students hope to further emphasize the racial injustice present in cases of police brutality.