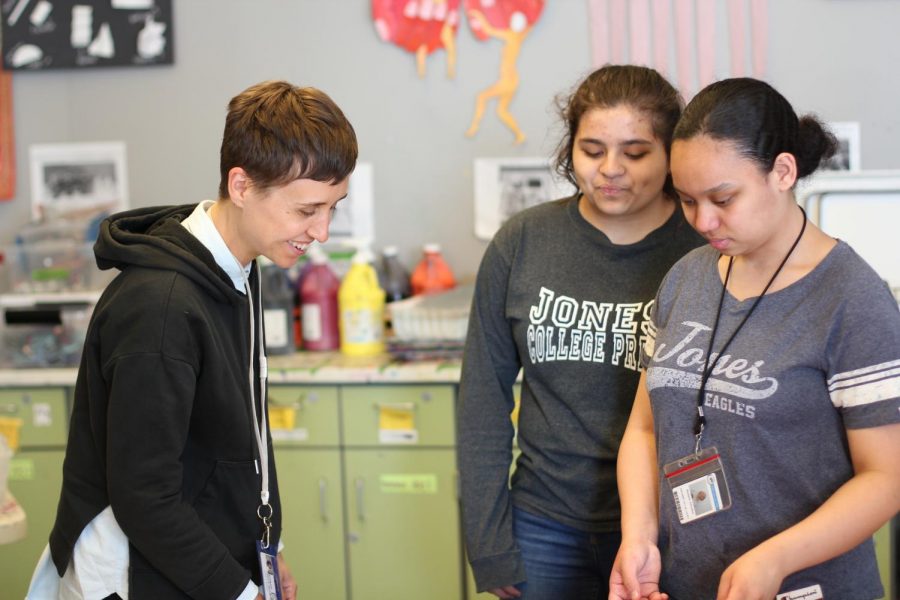 Boban helps students as they prepare their works of art

For the last ten years, art teacher Laura Boban watched Jones’ fine arts program grow and transform with her direction and guidance. Come September, however, rather than returning for another school year, she will be heading to Richmond, Virginia to begin her studies at Virginia Commonwealth University’s Fine Arts M.F.A. program.

Boban’s decision to leave Jones was one that had been in the making for a few years, stemming from a desire to pursue her own art.

“I feel that I’ve reached an accomplished goal of teaching here,” said Boban. “Where I feel like I still need to grow is in my own work as an artist. I decided ultimately that the best thing to do was to stop teaching and really focus on that, because teaching takes so much time and energy that it’s hard to focus on your own work.”

Boban began her art education at University of Illinois at Chicago, where she double majored in art education and studio art. This campus setting pushed her towards working at an urban school such as Jones, which she translated into her teaching.

“I had come from UIC, which was very much about teaching contemporary art practices,” said Boban. “I was thinking about students’ own narratives, along with the social and political themes that really reflect on their lives and what’s going on around them to make art, because that’s how contemporary artists make work. For me, it was really about pushing that.”

Virginia Commonwealth University’s M.F.A. program is reputed to be one of the strongest in the country, and the admissions process is extremely selective. The craft and materials program was Boban’s first choice, where she will concentrate in fibers. While she participates in her own studies, Boban will also be receiving a stipend to be an undergrad teaching assistant, and the first year will be paid for.

“I had an hour long phone interview talking about my work and what I’d bring to the community there since this program is so small,” said Boban. “The whole process was pretty intense.”

Boban was required to submit between ten and twenty pictures of her work along with a written statement, and a resume that she had been compiling over the past several years in the hopes of applying for these programs.

“As a whole, there’s ten students a year, but for each individual medium they only take two,” said Boban. “I’m still so surprised I got it.”

At VCU, Boban will have the chance to completely immerse herself in her art.

“Throughout my life, I’ve focused on other things to distract me from dealing with my own stuff and making the work I want to make,” said Boban.“And now I feel like I don’t have a choice, and I’m scared about that but I think it’s a good thing. I’m scared to put my work up and have critiques, but I’m excited about it.”