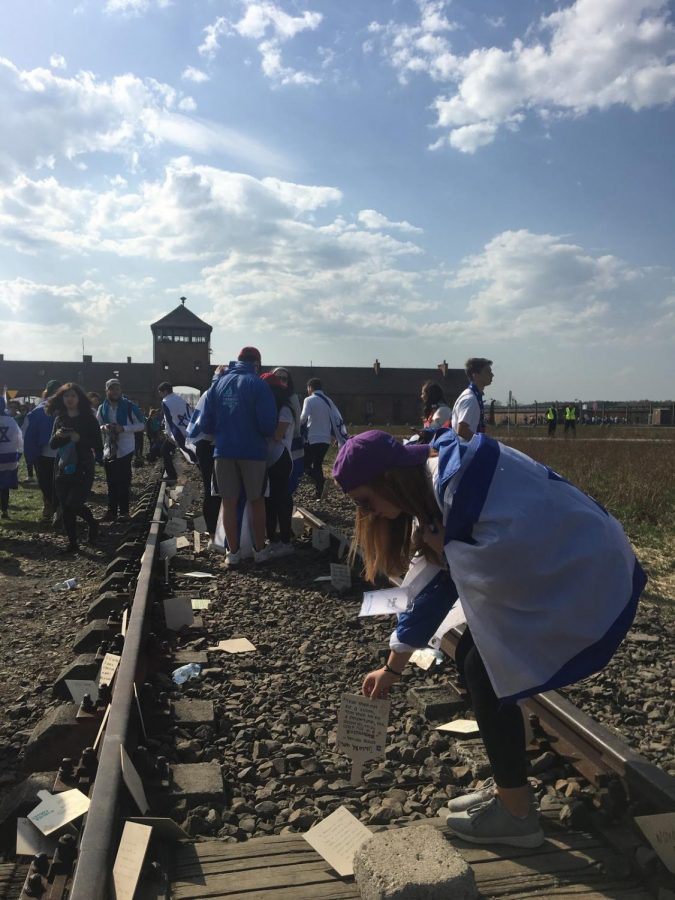 Never forget. Weiss along with the thousands of people who attended the march, wrote a Holocaust survivors quote on a small sign to memorialize her visit.

It seems as though there is a conspiracy theory out there for everything, ranging from theories of the existence of the Illuminati to the faking of the moon landing to who shot JFK.  While some people laugh at these seemingly insane speculations, others take these damaging accusations a step further. For instance, American radio host Alex Jones claimed that the 2012 shooting at Sandy Hook Elementary School was a “giant hoax.” He believed that the massacre, which left 26 children and teachers dead, was orchestrated by gun control activists in order to undermine the Second Amendment. As a result, Jones has faced several lawsuits from parents of Sandy Hook victims, as well as many other lawsuits and charges of slander from his other damaging theories.

One of the main conspiracies that I, along with many other Jewish people, find most infuriating is that the Holocaust – the killing of six million Jews during World War II – is a hoax. It is incredibly difficult and unsettling for me to wrap my mind around the theory that the Holocaust did not take place, especially after listening to not only the horrific stories from my grandparents, who are survivors, but to other survivors that spent time in death and labor camps such as Auschwitz, Birkenau, and many others.

I, along with thousands of other teens from around the world, chose to embark on the international March of the Living, an experiential educational trip to Poland and Israel. During the first week in Poland, I visited four main concentration camps, all of which were incredibly horrific and left me astonished–completely without words. The image of thousands of pairs of old shoes piled to the ceiling and empty gas chambers still stained with the emissions of Zyklon-B hasn’t left me, and should be enough to convince anyone of the horrific events of the Holocaust. As the sound of the shofar horn blared on the morning of April 12, I along with thousands of others began the march from Auschwitz to Birkenau with Israeli flags held high. The purpose of the march was to symbolize our everlasting strength as a people, walking in for our ancestors that made it through these brutalities and walking out for those who couldn’t. From that moment, my peers and I became living witnesses to the historic atrocities of the Holocaust.

I now feel confident that if I ever encountered someone who minimized or even denied the Holocaust, I would be equipped with the words and facts to explain why their perspective is not only wrong, but extremely hurtful. We are obligated to acknowledge, remember, and learn from this event and make sure something like this is never able to happen again. As the the survivors grow older it is becoming crucial that we educate current and future generations and prevent the Holocaust from fading from our collective memory. And in turn, encourage others to not idly stand by when put in situations in which others are being oppressed. We can’t idly observe conspiracy theorists or people in positions of power make damaging claims – we must stand up and fight against them.