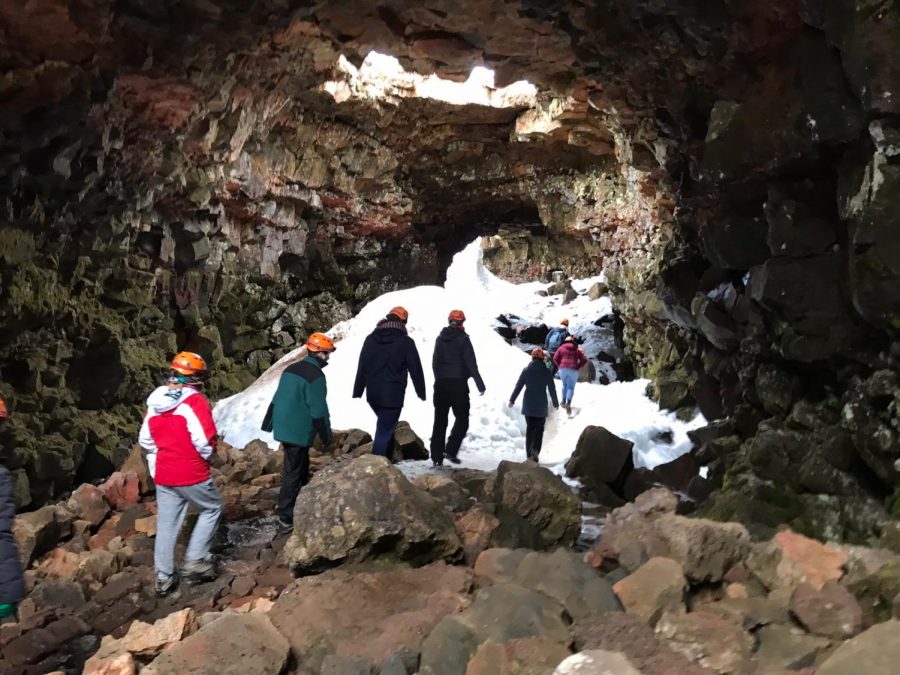 Students wander through the caves of Iceland.

Emerging from the dark bowels of a delayed flight, groggy and cold, 34 students alongside 6 chaperones adjusted their eyes to the bright morning light, smelling salt from the nearby ocean. The effect was intoxicating. The clean and clear (albeit sometimes sulfurous) air would sustain the Jones community in Iceland throughout the 6 day trip.

The first thing I noticed about Iceland was how clean everything is. There is noticeably  no litter and no pollution, and everywhere we went the landscape felt untouched. With roads curving around rocks that supposedly have elves in them, to the complete darkness within lava tubes filled with icy stalagmites, Iceland felt like like a fairy tale or dream land.

The trip, organized by Science teachers Nichole Lowery and Eve Reineke, doubled as both an educational science trip and seeing some natural wonders of an other-worldly place. We relaxed in the warm, light blue, water of the effervescent Blue Lagoon, and then later learned how the volcanic activity under the shifting tectonic plates creates the warm water, as well as the geothermal energy that powers the majority of Iceland.

Alongside the amazing activities and sights we saw, the unique energy of the group and chaperones added to our trip to the “Land of Fire and Ice”. After a full dinner one night, some students ventured to the local hot dog stand near our hotel, Pylsu Vagninn, for traditional Icelandic hot dogs. Another night, the majority of the group spent around an hour in an Icelandic thrift shop, looking for a break from the prices of the most expensive European city. These unplanned endeavors added to the lively nature of the trip, and rounded out our long and active days.

Overall, the trip to Iceland was a resounding success, although initially many were worried about the large size of the group. Ultimately, there was more than enough of the beautiful landscape to share.