While most students walked out in protest, few stayed in 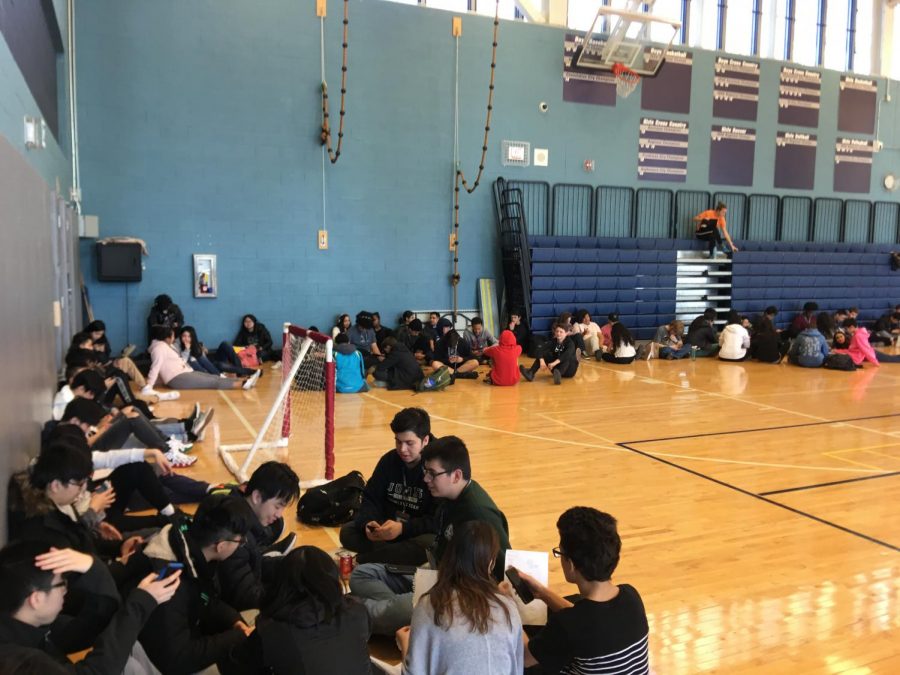 On Wednesday, the majority of Jones students walked out in solidarity for the victims of the Parkland High School shooting and in support for tighter gun restrictions. Seven stories above them, there were over 100 students grouped together in the corners of the gym, all with their own reasoning for not participating in the protest.

“I decided to come to the gym after having the opportunity to read the speeches that were going to be read at the walkout,” said Anna Heyse ‘19. “Those changed the conversation for me from being something that honored the students who died to being very anti-gun and gun control. All my friends have been very supportive of me and my viewpoints, as they know I’m not saying ‘Nothing needs to change.’ No one is really saying that.”

A pattern amongst students in the gym was contempt for the strong anti-gun sentiment and the fact that the walkout was not just in solidarity with the students of Parkland.

“I went outside for the first part that had to do with mourning the students of Parkland. The first 170 seconds. Then afterwards I came in here for the part where they were talking about gun reform,” said David Gonzalez ’18. “Standing for the school shooting victims isn’t the same thing as saying ‘F— the NRA.’   I believe owning guns is a God-given right and a right to self preservation. But the NRA does some stuff out of my comfort range, but they are still the protector of a fundamental right I believe every American should have.”

Some students chose not to participate as they wanted to remain neutral on the topic of gun control.

“I’m too indifferent, I’m not opposed to gun control, I’m not saying there should not be guns, I’m kind of just middle ground. I think by staying in here, I’m not taking a side or another,” said Carter Shirley ‘19.

Despite a clear anti-gun control sentiment from many in the gym, some chose not to participate in the walkout while still supporting the movement, simply because the conditions outside were not ideal.

“I decided to come to the gym today because it’s too cold outside, and if it’s a little bit warmer I would’ve walked out,” said Nabeel Ahmed ‘19. “I support the protest, and I think that there should be more gun control, especially after what happened in Florida.”

Despite administration’s efforts to allow students to refrain from participating in comfort and safety, some students felt less than content with the location.

“I believed there was a better space to put students than in the gym, as it was very polarizing and ostracizing to walk up seven flights of stairs and have to be looked at and just sit here,” said Heyse.

Some students in the gym expressed that rather than abstaining from the protest for ideological reasons, they felt that the protest was fundamentally flawed in its organization and would be ineffective in making any sort of changes.

“I chose not to walk out because I felt the facilitation of the walkout by administration devalued the idea of a protest. I felt that the protest was almost disingenuous in nature, and if we really cared, we wouldn’t have stayed out for a limited time with the permission and protection of the school,” said Heather Lowe ‘18. “I also feel that gun control is a complex, multifaceted issue, and it felt as if the walkout was a place for solely anti-gun rhetoric. While I don’t agree with restrictions on gun ownership, I wholly respect the motivations of those who do, and I’m proud to see our generation take direct political action.”

While they did not participate in the protest, all of them showed compassion for the victims of Parkland and felt deeply saddened by the regular occurrence of school shootings in today’s society.

“I think that the victims should be honored for eternity,” said Mack Madorsky ‘19. “Nobody deserves that.”