Through the eyes of the protector

Stepping into the shoes of Jones security 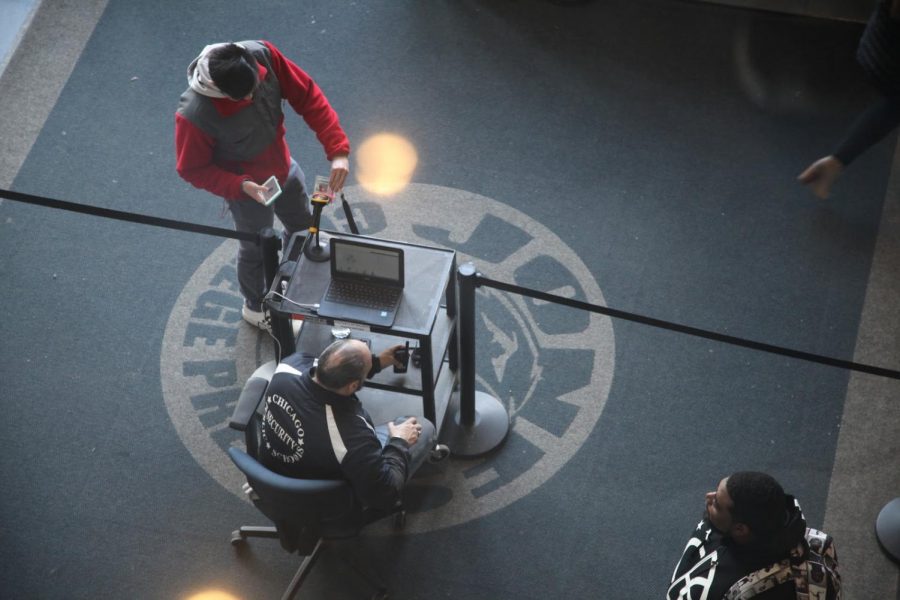 Security officer Rufino Padilla receives a message on his radio while manning the checkout for off campus lunch. After Parkland, the team has been working to improve the efficiency of their work, including radio etiquette, building coverage and responsiveness to both external and internal issues.

“It’s too sad, too depressing,” she said.

It is hard when the headline that reads Marjory Stoneman Douglas High School, Virginia Tech, Sandy Hook Elementary School, Columbine High School and a host of others, could have read Jones College Prep.

In a world where gun violence in a school setting has become the norm, those assigned to protect and ensure the wellbeing of students, faculty, and staff have had their work put under much more scrutiny. At Jones, those protectors are the nine members of the security team.

Once the morning bell rings, security officer Horatio Harris strides into a south building elevator and punches in floor seven. On the long ride up, he explains to a security substitute how both buildings are set up and what to look for.

In addition to the knowledge of the physical layout of Jones, Harris puts an emphasis on having knowledge of the Jones student body. Security does not just protect students; they also try to ensure their mental wellbeing.

After the Parkland school shooting, CPS sent a city wide email asking security guards to be more attentive and aware of the students. For Jones, this was something they had been doing for years already.

“Just because we’re security doesn’t mean we can’t help you or direct you to someone who can,” said Hug. “I always try to make myself visible and available to students.”

Whether that be coaching a Jones sports team, like Harris and Jarard Nathaniel are doing, or greeting everyone with music and small talk during the morning rush, the security team works to establish a connection of trust between themselves and the students.

Although many security guards know students, that doesn’t mean they get a free pass on IDs. School IDs are a hot button issue for Jones students and security guards, and it gets a lot of flack.

For new officers, checking for IDs isn’t a quota to fill or some regulation they can enforce to dole out punishment – it’s the distinction between a student and an imposter. Older officers usually know most of the students by face, but the new officers are still learning.

“Even if it was the mayor that walked in, we’d check for ID and make him sign in,” said Hug.

For Harris, this includes looking outside during his shifts. In the north building, he notices someone looking through the gates into the courtyard. He quickly shifts from his calm and relaxing manner to being on high alert. His radio crackles, another security guard sees it too. Harris goes into full command mode, ordering around the security team check out what the guy was doing. Before the guy even has a chance to think about doing anything, two security guards are approaching him, and he books it to the nearby Harrison Red Line stop.

This is all part of the job. Only five minutes prior, it was the routine checking of classrooms and making sure things were in order. However, with the drop of a hat a situation can occur. They must always be aware.

As Steve Golston, a security officer in his fifth year at Jones, makes his rounds throughout the day, he leaves no room, corner or door untouched.

In his eyes, every opening to the school is a doorway for a potential threat, and he oftentimes finds himself stepping into the shoes of a criminal in order to determine the most critical points on his route.

“If there was to be an attack on America, it wouldn’t be in a plane anymore. It would be in your libraries, in your malls – in your schools,” said Golston. “We have to worry about people attacking at every inch of the school, so we have to think like the criminals in order to be proactive towards danger.”

In their many years at Jones, Golston and his coworker Rudy Gonzalez have witnessed the way security approaches their job shift from typical high school surveillance (checking lockers, breaking up fights, etc) to an adoption of Homeland Security-esque protocols.

“After Columbine, we implemented the metal detectors – before that, no one had them,” said Gonzalez, who began working at Jones in 1998. “I think this is the safest school to be at in this time with gun violence. Chicago is a violent crime city, but we are trained for this.”

Bags left abandoned in the hallway are no longer overlooked as the doing of a forgetful student – they are seen as bomb threats and treated as such. Security team members are constantly put through timed and graded drills, tested in simulations ranging from an active shooter on campus to a student down somewhere in the building.

In light of the recent school shootings, the security team noted that the CPS Office of School Safety and Security is constantly watching through the security cameras scattered throughout campus, keeping the team mobile and on their toes.

“The average student thinks we don’t do anything, and that’s fine,” said Golston. “They don’t need to be thinking about how a terrorist could come into the building, but we do.”

With tragedies like the Parkland shooting weighing on their minds, many of the members of the Jones security team have formulated their own opinions on the next steps to be taken to ensure safety both in Chicago and across the country.

Gonzalez has traveled to Florida high schools like Marjory Stoneman Douglas, finding it easy to enter and walk around as many were staffed with little to no security.

In light of the fact that the only armed security officer on the Parkland campus ran out of the building the day of that fatal shooting, he believes the first step for schools should be investing in hired security officers.

“What happened in Florida was probably due to lack of protection – you have to have security teams in schools,” said Gonzalez. “We are the front line. We are the shields of the school. We are the ones who are going to step in.”

In terms of taking steps to arm teachers, the overwhelming majority of Jones security officers voiced concern including Gregory Lee a new member to the team this year who has been working in security for almost 20 years.

“I don’t feel its a teacher’s responsibility to carry a gun,” said Lee. “I know when I can draw my gun to protect myself and when I can’t. Most people can’t gauge those situations, especially not teachers.”

The day in a life of a Jones security officer is one of repetition and rotation, with ample time for reflection on the way the school operates and works to keep its students and staff safe. With this time, the security team has come up with a multitude of ideas, from the opening of exterior doors for students during passing periods to shave multiple minutes off transition time to planters in front of the expansive lobby glass to protect students vulnerable to an attack.

However, the security team’s job is far from perfect.

“There is always more we can do,” said principal P. Joseph Powers. Security guards like Lee and Harris believe that there is ample room for improvement. But they’re always looking for more ways to protect staff and faculty, connect with students, and make sure Jones stays a safe learning environment for everyone.

“People look at us and say ‘Oh well, they’re just security guards, what can they do?’” said Golston. “Whatever the title is, the meaning is to help keep all of you safe.”