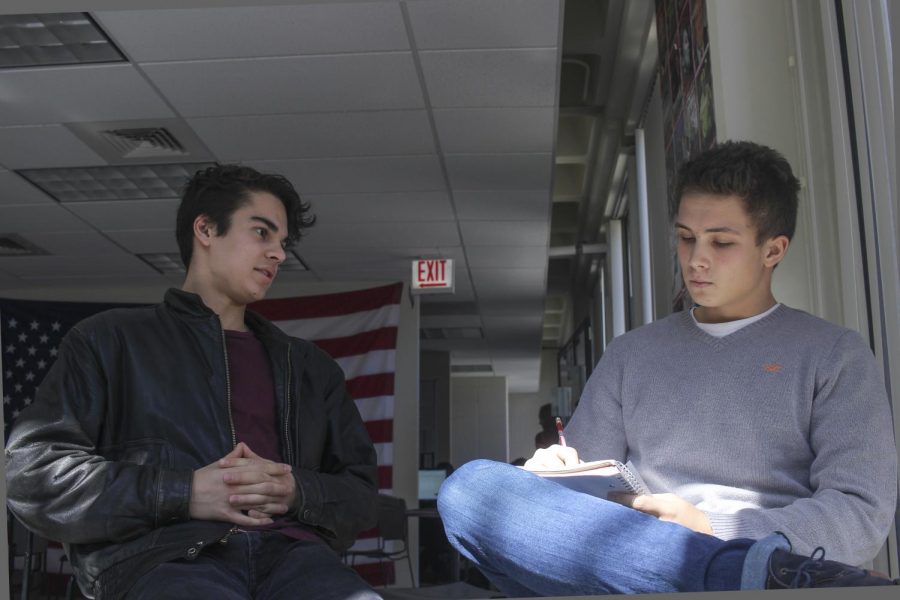 Representatives and members of the National Rifle Association have a distinct image in the media, but not many know that student R.L. Taradash ‘19 of Jones College Prep is a member of the NRA himself. Throughout Wednesday’s walkout, there were students in the crowd who targeted the National Rifle Association to address the issue of gun violence and instill change in gun control; Taradash was amongst the many who participated in the walkout.

Why did you become a member of the NRA?

How are you involved as a member of the NRA?

“I’m a card carrying member. I use my membership when I go to ranges; it gets me discounts. That also logs with the NRA so they know what I’m doing and which ranges to send money to that they support.”

How do you think the NRA is portrayed in the media?

Do you own any guns?

“My family has five guns at home: three shotguns and two pistols.”

Why do you own guns?

“We don’t own guns for home protection. We keep them unloaded, we keep them in a safe. The bullets are locked up in a different part of the safe. We keep them for target practice: it’s a really great sport. When I get older I will actually own a gun for protection; I’m going to go to classes, I’ll get my permit, and I’ll carry one. But in my house, we don’t have guns hidden for that purpose.”

How did you get the guns?

“Two of the guns were passed down from my grandfather, a shotgun and a pistol, and the other three were bought legally from a store in the suburbs. Background checks happened; my dad and I both have firearm owner possession cards.”

Did you walk out today and what was your thought process in making your decision?

“I did walk out. I walked out to commemorate the fallen, the people who’ve died, and not just in the Parkland shooting but in all the shootings. I wore all black because of all the student’s who’ve died. I did not feel like orange was the right way to go. I thought that orange was too bright of a color. Walking out and disrupting our learning environment for this sad day, we needed to do this because change is necessary. Wednesday was not to push my political agenda; Wednesday was to commemorate the fallen.”

Do you think the NRA is a contributor towards gun violence in America?

“I think that the NRA funds politicians who veto legislation that can contribute to gun violence in America. I think one of the problems the NRA has is they focus so much on preserving every aspect of the second amendment without any room for leeway. As a liberal member of the NRA, I want to change that one day. Within the NRA, I think we need younger members and more members of color. We need people who are more liberal minded, who vote Democrat, or who are moderate and are okay with guns so they can bring their ideas to the NRA.”

Why are you passionate about the NRA and guns?

“I would say I’m passionate about my rights with guns. The NRA is a vessel that I channel that through.”

Do you have a solution to the gun violence in America?

“I think we need stricter background checks, a more vigilant police force, armed security in schools and a percentage of armed teachers. Arming teachers should not remotely be mandatory. But I do not think that banning semi-automatic weapons and so called assault weapons is the answer because I can go eight miles south and still buy a gun.”

Would you feel safer if teachers were armed?

“I would feel safer if a percentage of teachers had concealed firearms.”

How would you choose which teachers should carry concealed weapons?

Do you feel attacked by the media and by the anti-gun population of America because you are a member of the NRA?

“No, but before this I did not advertise my membership in the NRA. I advertise myself now after recent events because I would like people to see that the NRA is not a bunch of faceless wolves. I’d like to see that we walk amongst everyone else like normal people.”

What are misconceptions that people have about the NRA?

“The NRA, I would like to say, does not destroy these misconceptions, but some NRA members are liberal. We’re liberals who just want a way to keep our gun rights and I’d like to think that a lot of the people in the NRA are less concerned with funneling money to politicians as to keeping their second amendment rights.

Do you think there should be legislative involvement in the gun debate?

“I think we need stronger legislation against guns.”

What is your political ideology?

“I’m a moderate. I’m liberal, in pretty much everything except with gun control.”

Should bump stocks be criminalized?

“Bump stocks should be completely illegal because they circumvent laws that ban fully automatic weapons.”

Would you give up your guns if you knew that meant there would no more mass shootings?

“Immediately. My hobby is not worth the lives of others.”