Jones walks out, shuts down Polk Street for gun reform 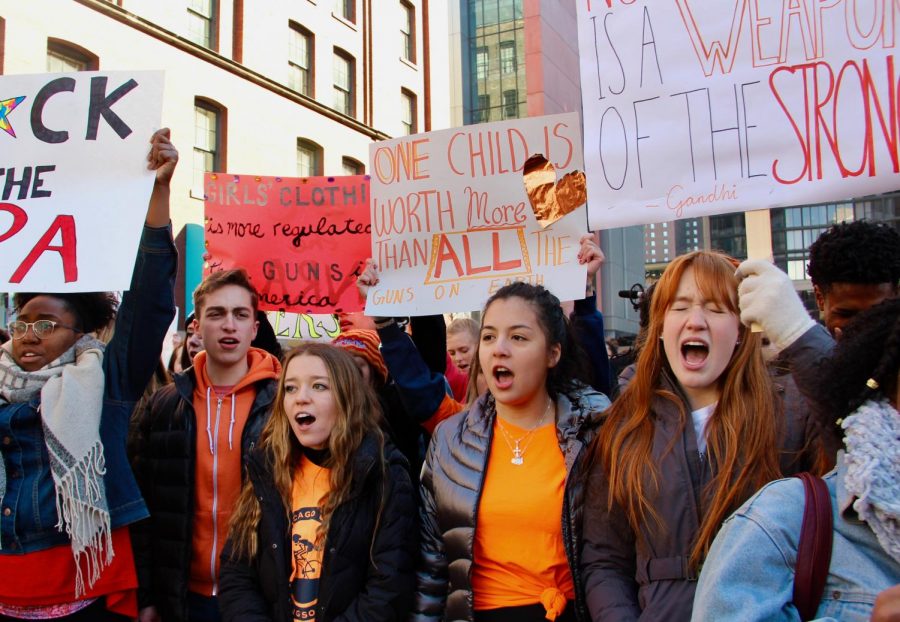 The noise that came from Polk Street was deafening. From the loud chants of “This is what democracy looks like” from the crowd, to the voices of the five student speakers, to the 170 seconds of silence, 10 seconds for each of the 17 lives lost in the Feb. 14 shooting at Marjory Stoneman Douglas High School in Parkland, Florida, Jones students made their voices heard against gun violence as part of the national walkout on Wednesday. The walkout not only addressed the events in Parkland, but also the gun violence epidemic within the city of Chicago.

Senior class president and walkout organizer Kai Wright ‘18 was the first student speaker to address the crowd and make her experiences with gun violence known.

“What I and the families that were affected by the heinous act in Parkland, Florida had in common was that we lost someone we cared about in an instant,” Wright said in her speech. “We lost a loved one because they were forced to stare down the barrel of a gun. I shouldn’t have to wonder whether or not they would be next or live every day with the anxiety that death brings. My home, my neighborhood, and my school, should not be a place that fosters fear for me or anyone else.”

Rachel Nwosu ‘18, another student speaker, used her speech to call attention to the ongoing gun violence issues, such as police brutality and gang activity, that affect people of color, especially black youth.

“I grew up hearing [about shootings] on the news,” said Nwosu. “You hear about those things and it’s not ‘These are senseless murders’, it’s ‘This is everyday. Just another one.’ I wanted to bring out the fact that no, this isn’t just another one. This is something that needs to be addressed. It needs to be addressed in the same way that Parkland is addressing their issues.”

Nwosu’s statements echo those who have pointed out that although the Parkland teens are getting a lot of attention, many youth, mostly youth of color, have been advocating against gun violence for a long time.

“No one’s blaming the victims in Parkland,” said Nwosu. “It seems like here, there are more dangerous neighborhoods, predominantly black neighborhoods, neighborhoods with people of color in them. Those victims are being blamed. I grew up and my parents were like ‘You can’t play in the front yard.’ It shouldn’t be the case.”

While a few students that did not participate in the walkout went to the gym, most students walked out of class at 10 a.m. for a variety of reasons.

“Schools shouldn’t be a place where you’re getting shot or murdered,” said Deborah Holton ‘21.

Eli Fritsch ‘19 held a sign that read ‘We the people deserve to feel safe’ and ‘F— the NRA’.

“I’m walking out in remembrance of the Parkland shooting victims and to protest the use of guns and violence, particularly in schools,” Fritsch said.

While some students walked out solely to commemorate those who had lost their lives in shootings, others walked out in protest of the National Rifle Association, as well.

“I think that it’s not fair that the government is prioritizing their alliances with the NRA over our safety,” said Frankie Kulwin ‘20.

Many students thought it was important that their peers organized the walkout.

“This is what America is all about. We need to stand up, make our own decisions and show that we can overcome everything that has happened,” said Sephi Konstantoudakis ‘21.

While some students walked back into school with excitement for how the walkout went, others had some criticisms.

Lily Ferguson ‘19, co-organizer of Fempowerment Chicago, a social justice organization run by mostly Jones students, said “I felt like there were a lot of people who didn’t respect what was going on and didn’t actually care about what was being protested for. I feel like it was ineffective the way that it was carried out because, in my opinion, it encouraged a lot of students who may have not wanted to go out, go out. I think it would have been more effective if only students who had really cared about it and truly wanted to walk out, had gone out.”

Dimitri Lima ‘18 brought up the importance of continuing to advocate for change.

“I believe [the walkout is] bringing awareness,” he said. “But, long term, we need more action, we need to lobby Congress more, and we need to see actual change. This is a step in the right direction, but I feel like we need to talk about actual legislation.”

Additionally, many students walked out to draw attention to the failure of authority figures to address the issue.

Students from Jones were not the only people on Polk Street during the walkout. The street was lined with Jones staff, Chicago policemen, news reporters and others from outside the Jones community. In addition to this, students from Muchin College Prep also participated in the walkout on Polk. Gisselle Ramirez, a junior from Muchin, thought that bringing the two schools together made a difference.

“It was successful because we brought more schools together, more than Jones. We contributed more [having] schools [join] together,” she said.

Many students who participated in the walkout wore orange in tribute to victims of gun violence.

“A CPS high school student, Hadiya Pendleton, was shot and killed after taking her final exams in 2013. She was 15. Her family decided to start the ‘wear orange’ campaign [in her honor],” said Student Government Association co-president and walkout organizer Helen Laboe ‘18. “The color orange is also used in hunting so other hunters don’t shoot you. Wearing orange shows that we are not targets. We are not supposed to be shot.”

The planning of the walkout was a collaborative effort between three student organizations: the Student Government Association (SGA), the Student Voice Committee (SVC), and the Jones chapter of the Chicago Students’ Union (CSU). The latter is a city-wide organization that focuses on advocating for student causes.

“[Chicago Students’ Union] is always keeping track of national student movements and making sure that they are continued in Chicago schools,” said Chloe Hancock ‘18, head of the Jones chapter of the CSU and one of the organizers of the walkout.

According to SVC founder Kate Ellbogen ‘19, the committee’s involvement in the planning of the walkout occurred “almost by accident.”

“Safety is a concern we knew people were having,” said Ellbogen. “After the [Parkland] shooting, [SVC] sent out a survey just to know [people’s thoughts]. Then, it was Dr. Powers who contacted us saying he wanted us to sit in meetings when he discussed safety and gun violence [with SGA].”

The student organizers have met several times with each other, as well as the administration, to ensure that the walkout would go smoothly.

Because of Jones’ vertical nature and downtown location, administration and the student organizers worked with the Chicago Police Department to have Polk Street blocked off from State Street to Dearborn Street for the walkout to take place. Permits had to be obtained for audio equipment to make the student speeches possible.

“We can’t just walk out to our parking lot or our football field like most other schools can,” said Principal P. Joseph Powers.

Adds Wright, “The first thing we wanted to do is march to Grant Park. We weren’t able to, logistically and for safety reasons, transport that many students that far. Our alternative to that was Polk [which is] perfectly fine as well. We just wanted to make sure that people were able to convene altogether in a space that is able to hold all of us [and] we didn’t want anyone to be separated.”

In addition to this, the meetings regarding the walkout also discussed how to make the walkout as student-led as possible.

“[We’ve had] lots of discussion about how political we can make the walkout as well as the students organizing doing our best to work with administrators without having them decide what we do because this is our student-lead movement,” said Hancock.

The administration has cooperated with the efforts of the student organizers.

“I’m assisting the students in terms of providing a means by which we can make this happen. I’m not addressing the content of it, or even the intent of it, so much as the logistics of it,” said Powers. “We definitely respect the students and want to validate their voice in this matter. At the same time, the school cannot be actually taking a political side on something. What we do instead is to say, ‘alright, if you wish to express yourselves, here are ways we can make this happen for you.’”

Teen involvement in this issue is part of the reason as to why it has become such a phenomenon.

“This is a reality that could very well be [ours] and I think we should care about that,” said Wright. “We should want to try and not have this fear culture in our homes, in our schools, and in our environments. I think it’s really important that we should try, if it’s in our ability to do so, to not foster fear or anxiety.”

The organizers hope that the walkout will inspire more activism throughout the student body.

“I hope this brings the Jones community together. It doesn’t matter what political differences we have as a student body, [I think] we can all agree that we don’t want people being killed in school,” said Hancock. “I’m hoping that after this walkout, we can be a more mobile student body and have more events similar to this one [with] more student organizing and participation.”

As for what students can do to keep the fight going after the walkout and the March for Our Lives on March 24, Nwosu also stresses the importance of staying informed.

“We have the power to make a difference, but we have to do our research, I think that’s incredibly important,” she said. “For example, Bruce Rauner just vetoed a bill that had grassroots beginnings, they worked very hard to make this gun control bill, and it was just vetoed, like that. We have to think about who we put in power and if they’re fighting for us.”

The organizers also urge students to call their representatives and work with local government.