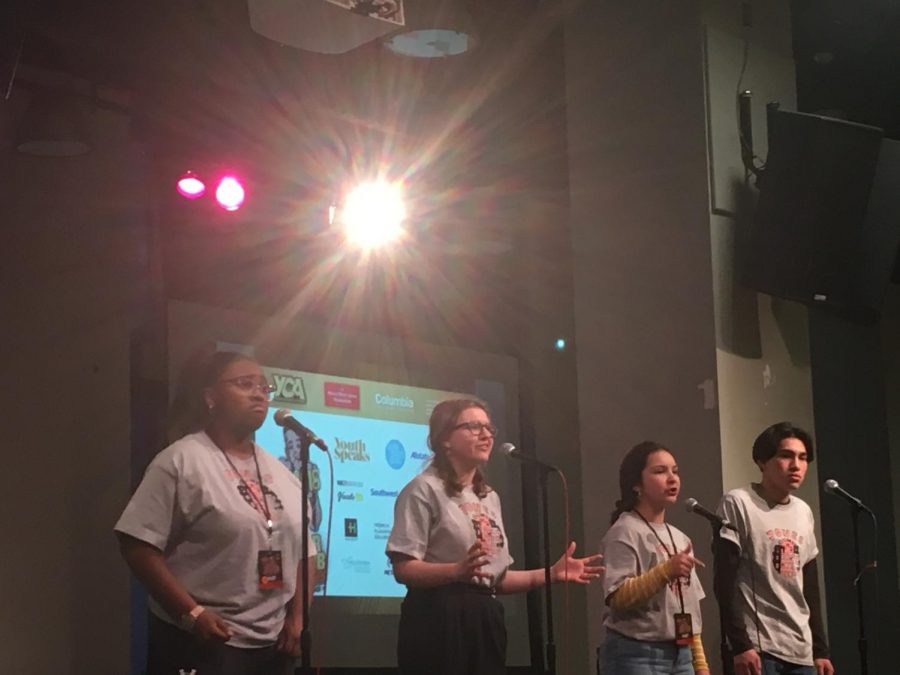 EMPOWERED From left to right, Monique Lawson ‘21, Grace Adee ‘18, Sofi Mena ‘21, and Jose Salgado ‘18 perform their group piece in the style of MTV’s Cribs at a Feb. 22 bout, where they came in second place.

In the coming weeks, the Jones Louder Than A Bomb (LTAB) team will aspire for victory in their poetry bouts. LTAB is the largest poetry festival in the world, hosting over 1,000 youth poets, taking course over five weeks of poetry contests, workshops, and gatherings. Jones students proudly represent their school and community groups by performing original solo or group poems, in hopes of earning high scores from judges.

In the past, Jones students participated in LTAB as individual poets, but as its popularity began to rise within the school community, students started their own slam poetry team that competes in the LTAB festival every year.

“I am really excited to get to work with all of these students and for them to bring their own voices and ideas to the team,” said LTAB coach David Gilmer.

The Jones LTAB team recently gained some new faces with the recruitment of youth poets from a community team called YouMedia. The YouMedia team, based out of the Harold Washington Library, consisted of students from Jones and other schools that did not participate on the Jones poetry team. However, it recently failed to meet the LTAB team requirements, leading it to merge with its Jones counterpart.

“I think it’s gone really well, its created a new unified poetry community at Jones which is really cool,” said team co-captain Grace Adee ‘18. “Not that there wasn’t really one before, but I’m really happy that awesome poets like Kai [Wright ‘18] and Semira [Garrett ‘18] are competing for Jones now. It’s really going to help us.”

Although LTAB is an individual competition, the Jones students were thrilled by the merger with YouMedia, even though it came with more competition in tryouts.

“This was one of the most difficult decisions that I had to make,” said Gilmer. “Earlier in the year we had tryouts for six spots. Everyone in the audience voted and the six receiving the most votes were invited to be on the team.”

Despite the tryouts being based on votes, Gilmer made the final decision.

“The remaining spots were [my] decision, which gave me the opportunity to ensure it was not just a popularity contest or to try and balance our team out, etc.”

Gilmer has participated in LTAB since 2004, starting as a youth poet. Then, he competed  against only 30 teams; now, he coaches students who compete against five times the amount of teams he did. His experience in LTAB paired with his experience as an English teacher secured his credibility as coach.

“He is an amazing poet and really gives amazing feedback to make sure our pieces tell the story we are trying to tell, which is great for me as a writer,” said Adee. “I’ve really grown this year.”

“He’s been doing LTAB for a long time, his feedback and guidance definitely help,” said Wright.

The LTAB team continues to prepare for competition with great ambition and high aspirations for victory.

“My goals are for them to be proud of themselves and to represent the best of Jones,” said Gilmer.