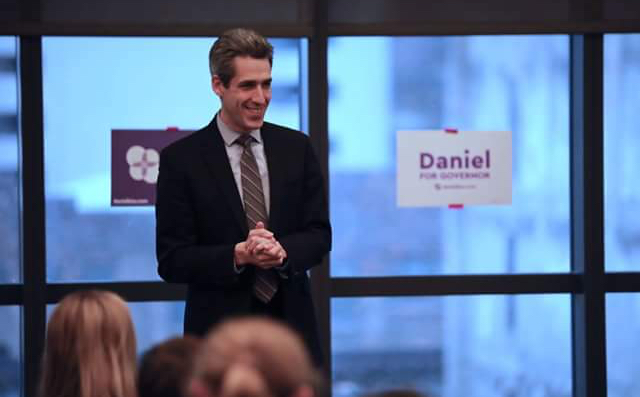 All eyes and ears were on Daniel Biss, the representative of the ninth district in the Illinois state senate. Biss spoke with students from Whitney Young, Walter Payton, and Jones about his campaign for Illinois governor on Feb. 23. This conversation included a broad range of topics, from school funding to gun violence.

“If we were to ask [Governor] Bruce Rauner and his $188 million salary to pay a higher tax rate than a CPS teacher, that would be unconstitutional,” he said. “So let’s have a normal tax code, that asks someone like Bruce Rauner to pay his share and use that extra money to fund schools properly across the state.”

In light of recent events, Biss also reviewed the Parkland, Florida high school shooting. He further discussed whether student and teachers should be armed.

“I don’t go to high school everyday, and you all do, so I don’t want to pretend that I walk in your shoes,” he replied. “We have a crisis in our hands. It’s easy to laugh at the absurdity of arming teachers or students, but that suggestion means people have concluded that school shootings are inevitable and there’s nothing we can do to change it. I reject that. We should all acknowledge that there’s something profoundly wrong with a society where 30,000 Americans die from gun violence every year. We can not allow this to become the new normal.”

Behind the scenes, Jones students Ellie Lawrence ‘18, Lane Kizziah ‘18, and Lily Stein ‘18 helped in organizing Jones’ first gubernatorial town hall. Along with the student organizers from Whitney and Payton, they were initially interested by the new voter registration age rule. This regulation permits those who will turn eighteen years old by November 6  to vote in the March 20 primary election. This led to their goal– inform other students of this new rule and educate them about the running candidates.

“I went to hear Biss at a town hall in my ward. Originally, going into the town hall, I was a Pritzker supporter, but coming out of it, I was a Biss fan,” Stein said. “Later, I decided to organize a phone bank at my house.”

“After talking to people on the phone, we realized that we could go after the younger generation, whereas Pritzker and Kennedy target an older crowd. This is why we wanted Jones to host this town hall,” she said.

In addition, Sadie Heller ‘19 spoke to the town hall’s turnout.

“I was really surprised that there were a lot of people from different schools including parents and teachers,” she said.

Heller noticed the sizable amount of young people present at the event.

“We’re the next generation. Even though I can’t vote this year, I can vote in four years. I think it’s important to host this town hall because people shape the government and these kids are the people. Jones should definitely host another town hall.”