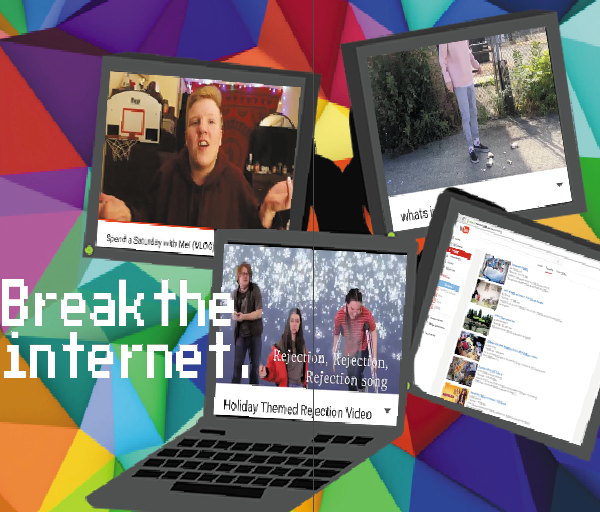 Max Dombrowski ‘18 (top left), Ethan Mueller-Soppart ‘18 (top right), and Elizabeth Goldblatt ‘18 are some of the many Digital Imaging III students who run and operate their own YouTube channels.

In the digital age, social media has revolutionized the sharing of information and ideas, creating a new form of entertainment and a new way for people to stay connected and meet others. For most Jones students, social media is a part of everyday life. Platforms such as Instagram and Twitter have been vital in organizing events, spreading awareness of issues that impact the community, and connecting the student body. But for some Jones students, social media is a foreign concept that feels like a waste of time or entirely disingenuous.

“When social media was first becoming a big thing [among my friends], I thought that people wasted a lot of time on it and I just didn’t think it was necessary or useful at all, so I didn’t get it back then and since then I haven’t really bothered,” said Franklin Brady ‘19.

Any student can attest to the fact that social media eats up a significant amount of time that could be spent working on homework or being with family. For Brady, the benefits of staying off social networking platforms outweigh some of the drawbacks.

“When you aren’t active on social media, you’re more attentive to your surroundings and generally more engaged with the world around you,” said Brady. “You can spend more time doing hobbies or schoolwork. You can’t really communicate with people as well since that’s the way most people communicate now, but I think it’s worth it.”

For others, social media lacks an appeal simply because it seems boring and requires too much effort to maintain.

“I never had a need for it, so I never got it. It just never came up that there would be a reason for me to get it, and there was never a time when I wanted it,” said Noah Eagle ‘18. “I don’t think there’s anything inherently good or bad about not having it. I don’t think having it means you’re more connected with people because that’s entirely up to you, whether you want to connect through social media or in person or any other means of communication.”

While connecting to people may not be an issue for most Jones students who remain offline, the shock factor that comes with breaking the status quo and not being on social media is a popular topic of conversation for Dianne Nacionales ‘18.

“Social media seems like it would complicate my life and take up a lot of time,” said Nacionales. “I don’t know a lot of people. Everyone I meet, it’s because I met them in person, but I don’t really feel like I’ve faced any consequences because of that. Whenever people find out I’m not on social media, they generally say, ‘How do you even live?’ or something like that.”

The idea of how people form strong relationships in the age of technology is a frequently asked question for those who choose to remain off social media, but many people who have given social media a chance feel that face-to-face relationships create far stronger bonds.

“I was on it initially and it was too much work. I also found that it was really superficial, because people would be like, ‘Hey! You’re my friend!’, but you could never get them on the phone. I just realized that to have actual authentic relationships, you need to have people who are willing to commit in terms of face-to-face communication, as well as online. So, I just generally did not like that isolation,” said English teacher Ebikepreye Ogundipe.

In recent popular culture, one of the main criticisms of social media and its popularity has been the spread of information and the ways news and ideas can be misinterpreted and misleading.

“I think the biggest effect of social media is the spread of information. That can be good or bad, because it brings a lot of awareness to certain issues or events to younger people who should be aware,” said Brady. “But the negative side effect is that a lot of times the information can be falsified or exaggerated so people have false thoughts about what’s going on in the world.”

“I think that it’s creating a society in which people have a hard time communicating effectively on a personal level. There are now classes at some colleges for kids to learn how to ask other people out on dates, and I find that social dysfunction really problematic,” said Ogundipe. “I think that people forget to be present because they’re so busy worrying about what’s happening next.”