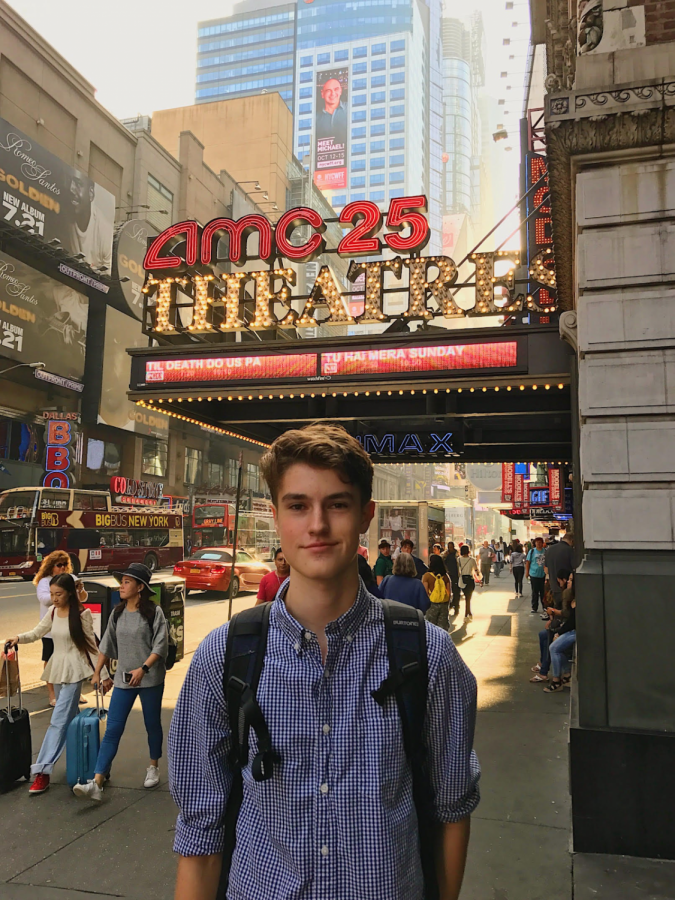 Henry Van Zytveld ‘19 is experiencing this ascending journey to success as he premiered his film, Fake Not False, at the All American High School Film Festival.

For most people, hobbies are simply hobbies; activities to casually enjoy and pursue in downtime. For others, hobbies take them to new levels of success and opportunity. Henry Van Zytveld ‘19 is experiencing this ascending journey to success as he premiered his film, Fake Not False, at the All American High School Film Festival. It was shown at the AMC in Times Square New York City on October 9th.

“My family has always been very artistic,” said Van Zytveld. “Not [always] in film, but I do have aunts and uncles who are in the [film] industry.”

With an introductory understanding of filmmaking, his curiosity in the medium was sparked in middle school by YouTube videos and movies. Fueled by this inspiration, he took action to pursue this fascination by enrolling in practical Digital Imaging classes at Jones. These allowed him to gain a technical understanding of the medium, but that did not completely satisfy him in his application of theory.

“I made a project from my fall semester class at Columbia [College] freshman year, but it wasn’t necessarily the greatest,” he said. “I had the tools, and it was a good overall experience, but I didn’t have the greatest story.”

Van Zytveld firmly believes that the story is vital for a good movie. As he likes to repeat, story is king. He notes the stylistic appeal of director Wes Anderson as a storyteller and the importance of documentaries as powerful ways to convey opinions and lifestyles. These stories are the glue of a movie. If the central story is weak or ill-expressed, the film could fall apart completely. This development of story was built throughout the course of actual experiences in making videos and movies.

“We made YouTube channels for Digital III, where we had to make videos every week,” said Van Zytveld. “I went around Chicago and would either set up a tripod at a specific place or just walk around and go up to people. Every week, I’d have a different question.”

This type of opportunity to produce regularly scheduled videos was key in the development of Van Zytveld as a filmmaker and his comfort in developing a film’s story. This ultimately culminated in a final project for Digital Imaging III students.

“We were making an anthology movie,” said Digital Imaging teacher Jake Myers. “It’s a collection of short movies that have some sort of theme that ties them together.”

The main concept came with an important caveat that proved central in connecting each of the films.

“We sat down as a class and came up with some constraints,” said Van Zytveld. “The main one was that we were given a fortune cookie and whatever the fortune was we had to write the script about that.”

With this theme in mind, Van Zytveld ventured out to create a movie centered around his fortune: ¨Beware coming events. They cast their shadows before them.¨

“I think we’re kinda in a weird time with news and the transfer of information,” said Van Zytveld. “I have experience with people telling me about crazy events only to find out that it comes from an Onion article.”

In a time with increased tensions and the struggle for trustworthy resources, he decided to focus on these aspects of society for his story. It resulted in Fake Not False, a satiric commentary of modern society.

“I’m a big fan of shows like Black Mirror that are able to comment about where we’re going as a society and some of the things we don’t realize we’re doing when we’re making decisions,” said Van Zytveld. “It’s a fake story, but it really draws off of stuff that’s actually happening.”

In Fake Not False, Van Zytveld created a product that mirrors this sort of active commentary in his expression of opinion and story.

“I think it’s really funny and really timely,” said Myers. “It’s this idea of taking something where people will take a random thing like a fortune and they’ll feel like it’s a sign, something that drives them to whatever source they can find to validate that sign.”

As a high school student with a low budget, he created a cohesive story that leads his audience to dig deep into the true context of the film, while providing some levity as well.

The film is something that he is proud of, proud enough to enter it into the All American High School Film Festival. It was also successful enough to be shown at one of the busiest movie theaters in the nation.

“I’m proud that I have something tangible, to be able to say I have this, I’m doing this now,” he said. “This is the one I’m definitely proud of, and just adding that it made it to this festival and I can say that I’ve had something of mine shown in the AMC in Times Square is kind of cool.”

It’s an accomplishment that doesn’t end after this festival but continues his journey as a filmmaker in sprouting new options and ventures for his future.

“I think this is maybe the first step for me,” said Van Zytveld. “It’s brought other opportunities for me as well.  I’m currently working on a website [called] Newgard Media, which is actually my street, with a lot of the kids who live there and do similar stuff like this.”

He will continue to pursue film in every form available to him whether it be in film school or a further evolution of his hobby, but remains grateful for those around him.

In a passing of the guard, he provides some encouragement to others who want to pursue filmmaking as a hobby or in other ways as well. A culmination of his own journey and experiences on the mountaintop of success that can allow him to definitively say that anyone can embrace the medium of film just as he did.

“You don’t need a $10,000 camera to tell a story,” he said. “If you pick up a camera and film something-you’re a filmmaker. Anyone can be a filmmaker.”