Sophomores rebuild the robotics club and gear up for spring competition 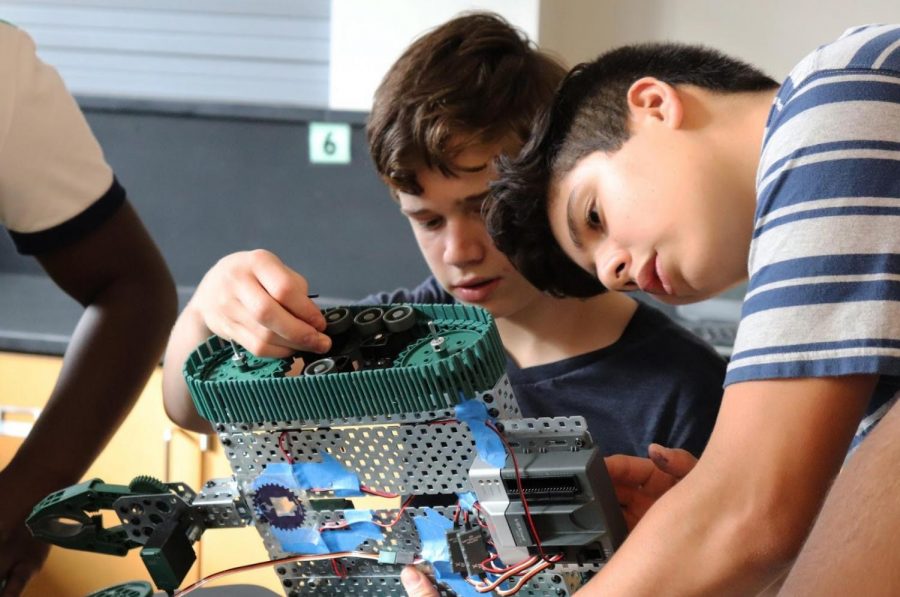 Arriving at Jones a year ago, a small group of freshmen aimed to revive a robotics club that had been laid to rest. Now, the club is back at full force with 17 members and its sights set on outmaneuvering other groups in the upcoming aquatic robotics competition.

According to Joshua Koch ‘20, co-vice president of Robotics Club, they chose not to bring back the club until late into the school year because of the academic stresses of freshman year. At that time, school was more of a priority.

But in the second semester, after getting two sponsors on board, they started meeting after school to work on robotics.

A year later, the club has recruited an army of new members due to the club fair. The popularity of their booth led to one of the club’s largest meetings.

Last year, there were four consistent members. Though it didn’t start off that way.

“It started off pretty big, we had a bunch of members come at first. Then it really just faded down to the last four,” said Andrew Hiss ‘20, the other vice president of Robotics Club. “We probably had 10 or 15 people [then], and then that went down really quickly.”

But what the club lacked in members, they made up for in initiative.

“We had five or six freshmen who really wanted to do a robotics club,” said club sponsor, Steven Clayton. “They knew that there was no longer a sponsor, and had heard that I had done robotics the last four years at my old school. I was working on a one year masters program last year. I didn’t have a lot of time, so I initially said no. They persisted.”

He and Erin Cathcara, fellow Robotics Club sponsor and physics teacher, had the students create a presentation to convince them to restart the club.

Now, the club is gearing up for the 2017 Shedd Midwest Remotely Operated Vehicle (ROV) Marine Advanced Technology Education (MATE) Regional Competition. They will compete against other groups this spring. Club President Joshua Blustein ‘20 said that this competition, which focuses on aquatic robotics, will be the first big competition that the club has participated in since its revival.

Although MATE has created excitement, it has also presented challenges.

VEX, which is not an acronym, is a company that makes supplies for building robots. Robotics Club has been borrowing VEX materials from the engineering department, and using them for projects.

“This new competition allows only a specific program we haven’t used and also doesn’t allow VEX. So basically we’re throwing everything we knew out the window for the time being and starting fresh, which is going to be exciting and also challenging,” said Hiss.

While the club anticipates this upcoming challenge, they have been focused on fundraising.

“Funding is probably our biggest issue because we don’t have as many supplies, especially for this new competition, where there’s a certain set of materials you have to get that won’t be provided,” said Hiss.

Blustein said that they are doing some fundraisers in hopes of creating a budget for materials. The club has gotten the ball rolling with this goal.

While the club has put hours into fundraising this year, last year they were using that time to find a club sponsor. The group asked multiple departments before convincing a teacher to sponsor the club.

Clayton said that the time commitment and the intimidating term “robotics” are main reasons why most teachers, including himself at first, did not agree to sponsor the club.

“I think it’s a large commitment. It’s unpaid, so you don’t get paid extra for clubs like that. And a lot of teachers in this building are already doing clubs,” Clayton said. “Also, Robotics Club is scary. Most people don’t know how to do robotics, so going to a teacher and saying ‘Will you do our Robotics Club?’ when they’ve never had experience with robotics, can be really intense. It’s not just like ‘watch us do this,’ it’s ‘help us learn this stuff.’”

This year, the club has fewer obstacles.

Clayton said that the major roadblock the club faced last year “was that for the competitions, we needed to sign up in August. Because we weren’t an established club at the beginning of the school year, we missed the deadlines.”

This is no longer an issue.

But one problem that they could face is getting pool time. The MATE competition requires the club to build an ROV, which can complete tasks underwater.

“We haven’t contacted the school or anything yet. What happened a few years ago is that we couldn’t do it much after school, but there were certain days where it was ok,” said Koch.

There is excitement for the Robotics Club’s newfound popularity from the club leaders.

“We’re glad to have people join,” said Hiss. “We want there to be a structure, because just four guys messing around gets repetitive after a while.”