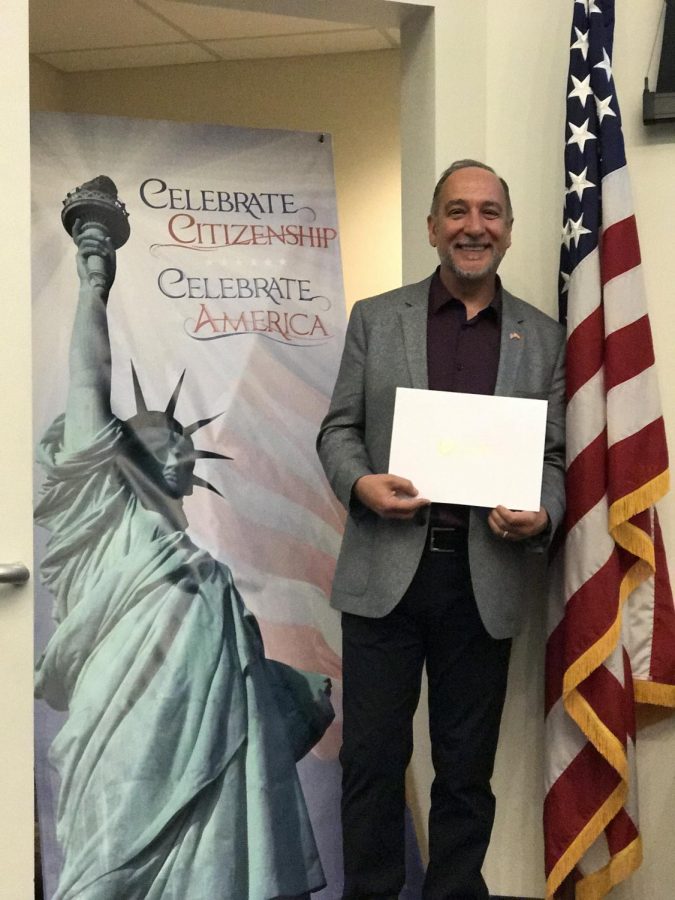 "For documentation I had to prove everything, that I had been a good citizen and a person of good standing. They look at all my documents, speeding tickets, everything, and they know every time I left the country."

While teachers are relaxing for the summer, Spanish teacher Rafael Jimenez  was gearing up for naturalization into American citizenship. He entered into the U.S. in 2002 on a J1 visa sponsored by Chicago Public Schools  and quickly transitioned from teaching English in Spain to teaching Spanish in Chicago. Jimenez created a relationship with CPS that lead them to sponsor him on a working H1B visa for years to come.

“This is an expensive process for the employer,” said Jimenez. “Knowing all the financial hardships of CPS, I’m grateful that they kept sponsoring me.”

Although CPS kept the sponsorship for the long haul, it was a tedious process in which he had to go back the Spanish Embassy every three years to get another sticker added to his visa, along with paying the fees that came with the sponsorship.

Patience wearing thin, Jimenez persevered through the ambiguity of having to pack up and leave, therefore the only option standing was to become a full-time American citizen.

“While I was working on the H1B visa, I could only work for my sponsor,” said Jimenez. “From 2002 until July of this year, my only option was to work for CPS or to leave, that’s it.”

In addition, Jimenez built a family here. His son graduated from the University of Michigan and he has an American husband, who has family close by as well. Without becoming an American citizen, Jimenez would still be denied opportunities, even being in a civil union with an American Citizen.

“Until the Supreme Court repealed the Defense [of] Marriage Act, even if I was in a civil union with an American citizen, I still couldn’t apply for any other jobs. So it was either leaving him here, or both of us moving back to Spain.”

Without being a full citizen, Jimenez wouldn’t have the right to vote or frankly feel comfortable stating his opinions to many of his peers. However, he knew that once he was granted citizenship, that pressure would be lifted off his shoulders.

“Now I can open my mouth,” said Jimenez. “If someone says something, I could say that I’m a fellow citizen and I have the same rights. That makes a big difference.”

Finally, after many years and established patience, Jimenez was sworn into citizenship with family and friends, all holding a mix of red, white, and blue balloons.

“The best moment was when I was sworn in,” said Jimenez. “Because I got to say “Hey, I’m a citizen.”

Principal P. Joseph Powers has experience hiring and working with non-citizens. However, in his mind, as long as everyone has gone through the same background check, they all have an even chance of becoming a teacher at Jones.

“I don’t see a distinction between employees in that regard [non-citizen versus citizen],” said Powers. “I think it’s good for students to have different perspectives and be able to interact with people from other countries and to get a little bit of a feeling of how they think, what their backgrounds are, and  how they view the world.”

Spanish III teacher Evelyn Jimenez (no relation) thinks similarly in regards to the fact that it’s beneficial for students to be taught by teachers of various ethnicities.

“I think that [a diverse teaching staff is] very important,” said Jimenez. “I think that students need to be exposed to a variety of cultures, a diverse staff helps to implement that and for the kids to see that all different cultures can be successful.”

As far as plans for the future, Jimenez plans to continue teaching at Jones and being a part of American society.

“I feel very privileged,” Jimenez said. “[I] have nothing but good things to say.”