Teens actively involve themselves in campaigns during election cycle 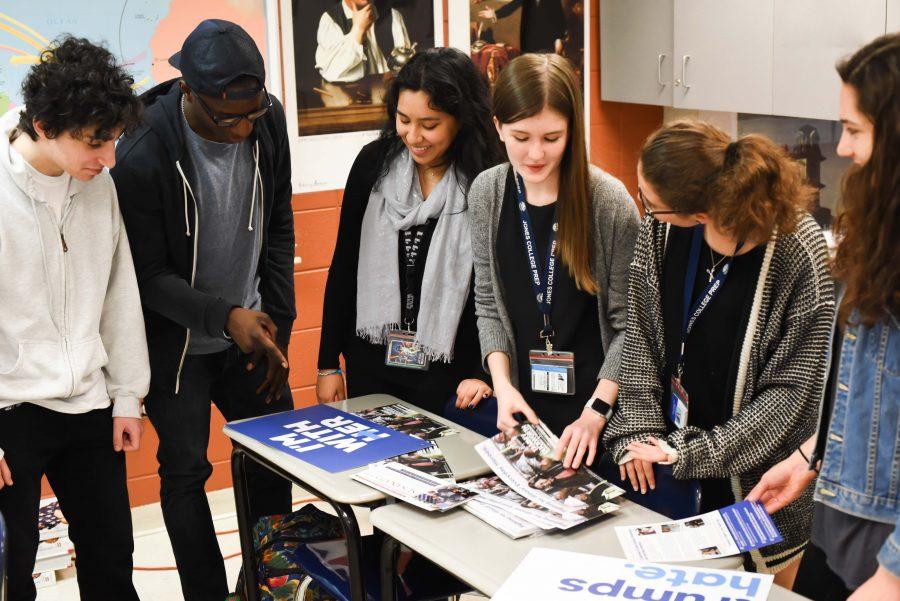 Teen involvement in politics nowadays seems to reach the extent of an occasional controversial post on their Facebook page about the upcoming presidential election, however, a few Jones students have taken action in attempting to turn their beliefs into a reality– volunteering nearly 15 hours a week of their time to political campaigns.

Ben Keeler ‘18 began working as an intern at the local Mark Kirk senatorial campaign office this summer. Keeler works most days after school, and on weekends.

“As an intern, I do a lot of calling, in which I either try to fill out as many surveys as I can, or I do advocacy calls, which is where I promote Kirk,” said Keeler. “I use an app called i360 for the calls. I also do doors, which involves me getting assigned to an area and canvassing potential voters.”

Keeler said he has learned plenty about how a campaign operates, as well as the strategy that goes into targeting voters, and in the process has become more passionate for this subject.

“I would like to explore a career in politics or government, by either possibly running for elected office, or working as a campaign manager or another role within a campaign,” he said.

Felix Hecht ‘17 heard about the opportunity to intern on the campaign from his friends. He now goes in everyday after school for two to three hours calling voters and canvassing door to door.

“I got started with the internship during the summer, and so far I’ve learned that some people are very passionate, on the phone at least, about who they want elected,” said Hecht.  “They will have extensive conversations where they open up about who they are and what they believe in over the phone.”

As young adults on the cusp of the age to vote, many teens forget what a privilege it is to live in a country where the voter possesses so much power. Taking the next step in recognizing this power and forming their own political viewpoints is something that these young men have worked hard to accomplish.

“I think it’s important for teenagers to be able to construct and have their own political views,” said Hecht. “Not just be influenced by what their friends say, so that they can build their own argument and stance on issues. Especially at our age when we’re approaching adulthood, we need to understand how our government is run because that is the only way to fix it.”

Ethan Greenberg ‘17 volunteers his time at the Mark Kirk office with Keeler. He feels that a lot of people remain uninformed about important issues due to a lack of initiative, and that as a result, their viewpoint will be swayed by the things people around them say.

“A lot of kids will hear the popular opinion on an issue and let that become their stance as well, becoming stuck in it,” said Greenberg. “People need to learn to become more open minded and do their research before jumping to conclusions. Politics are much more complicated than most teens realize, and volunteering time at a Republican office it’s really interesting to see what people will say and the judgements that can come about.”

Kiley Marron ‘17 canvasses in Downers Grove every weekend for a joint fundraising committee between Tammy Duckworth and Susana Mendoza asking voters who they will be supporting.

“I enjoy the experience of interacting with voters. Since I can’t vote myself, I like to promote voting in others,” said Marron. “There are a lot of people who don’t care about the outcomes of elections, and urging people to vote, even if it’s not for my candidate is really inspiring.”

Marron believes that there needs to be more education about what our elected officials do so that a greater concern can be developed about teaching the works of a political campaign, the way our government operates, and how to form political viewpoints.

“I’ve learned to keep an open mind that regardless of your political party we all need to work together and see what one another is trying to accomplish,” said Greenberg. “If more young people did the research and put in the time I think we could be the generation to bring our country into a much better place.”