Security guard Francisco Perez has been diagnosed with cancer and is currently undergoing chemotherapy. His surgery in removing parts of the tumor was successful and his is now following through with his new daily routines. 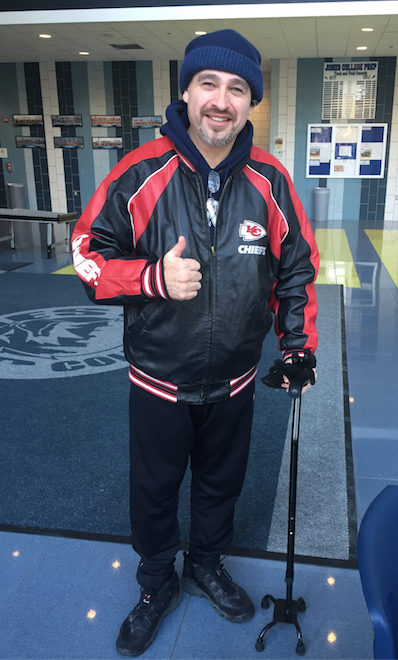 Francisco Perez comes back to visit Jones during his first resting period after chemotherapy. He is feeling much better and is spending lots of time with family and friends.

When students were ready to rush the doors to begin their winter break, security officer Francisco Perez, a major force that would regularly hold them back, was noticeably missing. A man known around Jones for his grit, tough persona, and past life as a boxer was about to face his toughest opponent yet: cancer.

On Dec. 5, Perez went to the emergency room at Norwegian American Hospital, where doctors found a tumor the size of a baseball in his small intestine. When they tested pieces of the tumor for cancer, the results came back positive. He has been absent from work since the diagnosis.

“I didn’t want to miss work, but the stomach pain was rough,” said Perez. “I have been having this pain for about seven months, but it got so severe that I had to tell my doctor.”

In the past three years, the doctors had not seen any signs that would impact Perez severely, but as soon as the pain became unbearable, he notified his personal doctor. The doctor originally scheduled an appointment for him to see a specialist on Dec. 10, but by then Perez had already been diagnosed with intestinal cancer.

“My initial reaction was shock. I wasn’t expecting [cancer], but it was a wake up call. I immediately prayed and talked to the Lord, and I was asking Him to do His will,” said Perez.

Perez had emergency surgery a few days after being diagnosed, and doctors were amazed by his recovery. They “thought it was a miracle.” Perez strictly believes that God is taking each step with him, as he is currently in the process of chemotherapy.

“I receive one full week of chemo[therapy] from seven in the morning until six in the afternoon, and then I check in with my doctor twice the next week,” said Perez. “They check my bloodstreams and my organs and then I take [a week of] rest.”

Perez started chemotherapy on Jan. 11 and will continue to repeat the process until the treatment repairs the cancer cells in his body.

As for Perez’s role as security guard at Jones, Principal P. Joseph Powers is in search of a “temporary person” for the job.

“We’ve staggered schedules a little bit for now,” said Powers. “We’ve had some interviews so far and we will have a few more coming up, but the job will be temporary until Mr. Perez confirms that he can come back.”

The position was advertised, and Powers received 25 applicants thus far. He is reviewing their resumés and in the meantime is relying on “two-day substitute teachers”.

“We miss him being here, but we are all positive that he will be back sooner than later,” said Powers.

Some students miss interacting with Perez in the hallways. Gabriela Pantoja ‘16 said, “Francisco is someone who you are always happy to run into in the hallway, whether he’s kicking you out of the link when it gets late, cracking a joke, or telling you about his enthusiasm for boxing. He does it with a smile on his face, and it was always nice to see him having a good time regardless of what he was doing.”

In the midst of Perez’s cancer notice, his wife, Maria Roman, created a GoFundMe page that has raised almost $3,000 in just one month. Roman is really appreciative of all the funds and the Perez family is ready to “give [their] all and fight the cancer.”

Click on the link below to donate and help out Francisco.