"It was four years in the making." 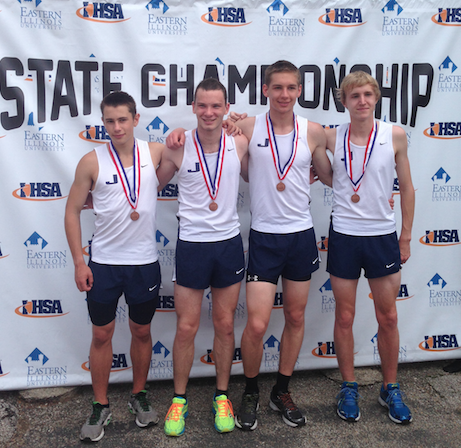 The four runners with their medals.

Jones Track and Field participates in the largest division, class 3A. Placing sixth awarded them All-State Honor, meaning they are one of the best teams in the state. All-State Honor is awarded to the top nine relay teams in the 3200m.  Sarchet said, “It was very gratifying. We worked really hard and it paid off. The schools we were competing with are at least double our size and have tracks and better facilities.”

Before qualifying for the State Finals, the relay team set the 14th fastest time in the nation for the 3200m during sectionals. This time,  7:48.55, is now the the 22nd fastest in the nation for this specific relay. Protsiv said, ” It was four years in the making. We are the first Jones 3200m team to make it to the finals and become all-state.”

This was the seventh consecutive year that the Jones boys track team advanced to State Finals.