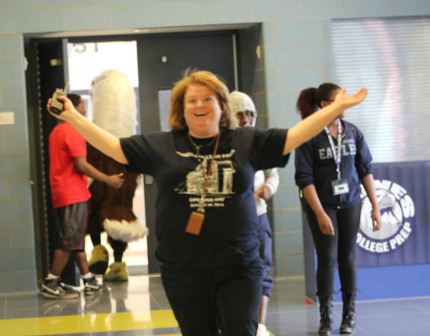 A happy Rownd after a Jones' first Eagle Games

Assistant Principal Carolyn Rownd is leaving Jones, but this time she is leaving for good.

Rownd made the decision to accept Sacred Heart Academy’s offer to be the Head of their Middle School in the late March. “I was approached [by someone from Sacred Hearts] about applying [for the  position]. I liked their school and their mission.” Rownd said.

The Roman Catholic school’s mission is based on the history of the Society of the Sacred Heart. The school’s belief is that people who are aware that they are loved and appreciated at a younger age will be in the best shape to gather knowledge and apply that knowledge for themselves and the world.

Sacred Heart Academy is a private catholic school is located on the North Side of Chicago. The school teaches kindergarten to eighth grade and has the enrollment of 702 students versus Jones’ 1,222 students. Sacred Heart also has single sex classrooms in comparison to Jones’ coed classes.

“They are going to be different [because] they are ramping up to go to high school rather than ramping up to go to college,” said Rownd “The school is smaller, so I will be able to get to know my students by name, their families, and be more involved.”

Before Rownd joined the Jones’ staff, she was an admissions director and teacher at Northside College Prep for 10 years. Rownd has been at Jones since 2008, which makes her the longest-serving assistant principal out of the three the school currently has.

During the beginning of the year, she was by the security desk almost every morning making sure everyone had followed Jones’ dress code.

“She is one of those people who is always there to talk and support the Jones community,” said Nicole Katzin ‘17.  “Everything she did, she did to make Jones better. I think Jones is losing a valuable member of it’s community.”

Rownd is staying at Jones until the end of June. She will be attending some of her final Jones’ events like senior prom, senior dinner and graduation. “I will miss the kids, the teachers, the staff, the people,” said Rownd.

Rownd believes that the school will do just fine with her. “It will keep going. It was here before I got here and it will be here after I leave. [This school] has good students, good teachers, good principal it will be fine.”

Rownd does not know who will take her position as assistant principal. “I do not choose my successor”