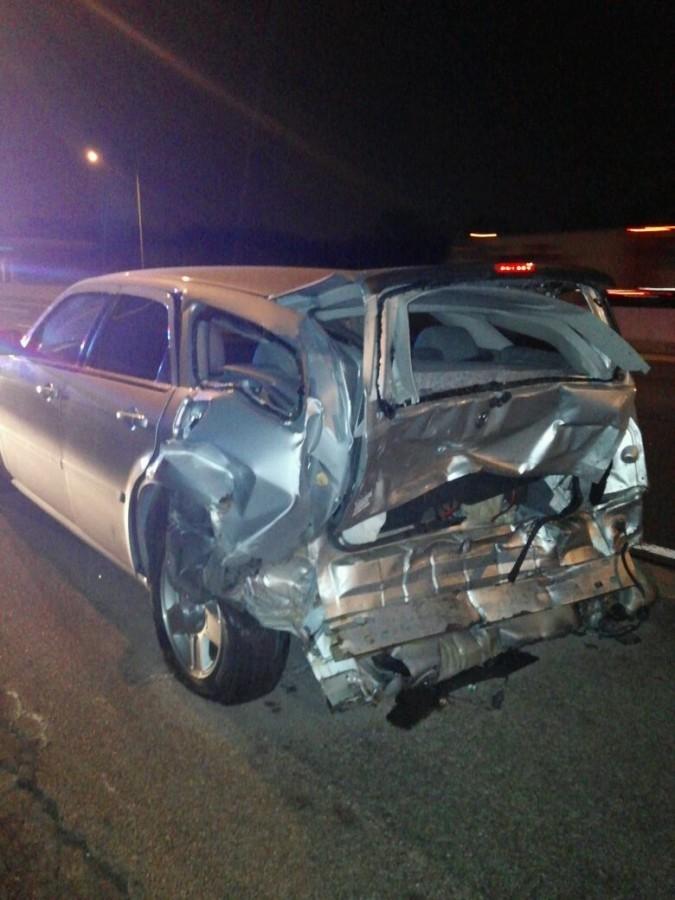 In Illinois numbers are posted in glowing lights above the highways. These numbers represent the total car traffic related deaths of the year. It’s easy to forget that number when it’s passing by at 60 miles an hour, until it’s you who’s crashing, 910 that’s the number I remember.

It was after 10 on a Thursday, my mother and I were driving down the highway after my shift at work. I was asleep in the backseat when it happened, but I could still hear the screaming.

My sleep had been black and dreamless, no sound or color. Suddenly there was an impact, and a loud crunching bang that resonated in my mind, followed by a deep aching pain in my lower back. I could hear my mother start screaming, but despite the pain and noise I didn’t wake up.

I was told had what happened by my mother after the fact. Another car had come behind us and was moving too quickly for my mother to get out of the way. The impact sent us spinning across the lanes to the point where we nearly tipped over into a ditch. When we stopped moving we were in the center lane facing oncoming traffic.

By that time I was waking up. The first things I noticed were the head lights coming toward us, then the pain in my back, the my mother, who was screaming at me to get out of the car. Dazed I gathered my things a started trying to open the doors. As I pushed I started to connect the dots. We had been hit, and the trunk of the car had been completely crushed. I started to panic, wondering if I had injured myself in the accident and couldn’t feel it yet due to adrenaline. I didn’t wait to find out.

Looking back on it, I’m amazed by human survival instinct. Almost as soon as I started to panic I was able to calm myself down. I reminded myself that the car was full of gas had the potential to explode, we needed to get out. The only door that would open was in the back seat, I crawled out first and then my mother.

Being outside was just as frightening as being in the car. My mom and I were still stuck in the middle of the highway facing oncoming traffic. I underestimated the other drivers they allowed us to get to the side of the road, several stopping to ask us if we need help or to call 911.

The police arrived quickly. My mother was angry and shaken but she brushed it off. I was a mess crying and shaking and hardly able to answer the police.

As we were being questioned I noticed the driver that hit us standing on the side of the road. His car was in a ditch but he was fine. Never in all my life had I seen someone so pathetic. The man was drunk and his clothes were stained from where he wet himself during the crash. The police arrested him for drunk driving. Not once did he ever face me.

My Aunt arrived around 20 minutes later and picked us up. She drove us to her home in the suburbs. I was pretty numb by then but I realized that if we had been hit in a car like my aunt’s Mini Cooper I would be dead, crushed between the front and back seats. Just another glowing number.