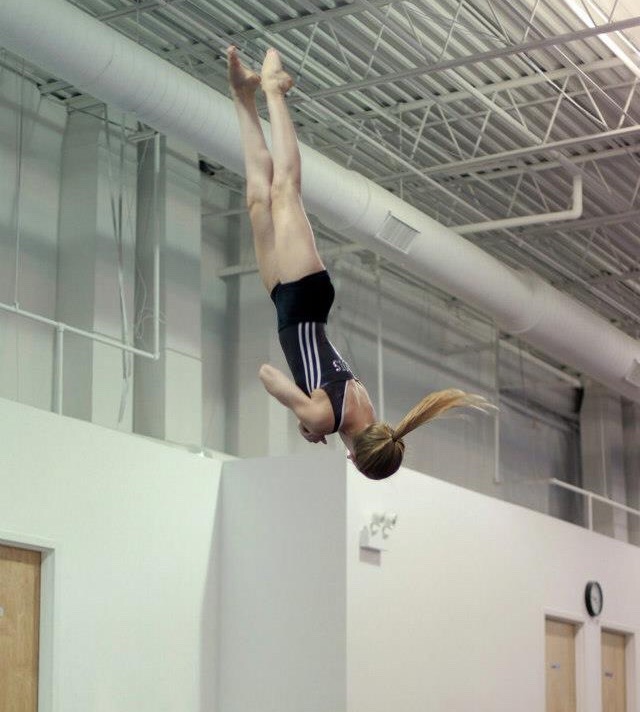 Buescher at IK gymnastics where she trains 6 days a week and 4 hours a day.

Most people don’t find their calling in life until they are much older, but for Lena Buescher ‘16, her love of gymnastics was realized at age two.  She began at Lake Shore Academy and began competing with them when she was only six years-old.  In November 2011, her coach, Irina Kudina, opened up her own gym, IK Gymnastics, and Buescher began to go there.  Buescher is a level ten gymnast and credits her accomplishments to Kudina. She has had Kudina as a coach her entire career of gymnastics and is very fortunate for that.

“It’s better than not having the same coach,” said Buescher. “There are a lot of girls who change gyms and get different coaches which is fine but I think I got to build a different relationship with my coach.  Most gymnasts do get to [build a strong relationship], but my relationship is more of a friendship and she is a really great coach.  Since she knows more about me, she can adjust to what I need.  It’s a really good relationship.”

The move to the new gym was a much needed action taken by Kudina and the team, and created a greater supply of resources for the girls.

“Lake Shore Academy was in a warehouse and we didn’t have the right equipment to go to the higher levels, said Buescher.  “IK has the state of the art equipment and everything we need and we have more time to ourselves since we don’t have to share it with younger gymnasts.  We having the best training environment [at IK].”

After spending her freshman year at the Ogden International School of Chicago, Lena came to Jones to spend her next three years.

“[Doing gymnastics] is harder in high school than in grade school, said Buescher.  “There’s a lot more work now.  I have to manage my time more, but I still love it.  I find time to do my homework, [high school] is just much more time consuming.”

In coming to Jones, Lena notes the positives and negatives of going to an academically rigorous high school.

“The workload is a lot harder than it was at my previous school,” said Buescher. “But the block scheduling helps so much.  I don’t have as much [homework] every night which helps because I get home super late.  AcLab also really helps because I can finish a lot of my work and see a lot of my teachers which is amazing and something I could never do freshmen year.”

Gymnastics is one of the most demanding and time consuming sports out there.  With a life and a love for gymnastics, it can be difficult to balance the two.

“I practice 6 days a week, 4 hours a day,” said Buescher.  “We train from Monday to Saturday.”

Buescher’s friends have noted her dedication and love for the sport.

“Lena is a super dedicated athlete,” said Olivia Ottenfeld ‘16.  “She spends all of her time doing gymnastics.  She has a lot of good relationships with friends, but she spends a majority of her time training.”

With many gymnasts’ initial dreams being Olympics-driven, such as Buescher’s, she has come to realize another noteworthy goal and hopes to continue training through college.

“I do want to do college gymnastics, preferably D1,” said Buescher. “It’s a large process and I was injured for a few years so I’m kind of behind.  But I do hope to do that [in college]. If that doesn’t happen then I will probably just do club gymnastics in college and get a good experience out of that for life through discipline and time management.”

With Buescher’s injuries setting her behind, she notes that scholarships for college could be difficult to achieve.

“I would love to get a scholarship, but I’m a little late in the game,” said Buescher.  “Most gymnasts commit [to a college] their sophomore year, but I was injured during that time. I hope to get a walk-on position on a team and if that doesn’t work out I would do club. I just would want to be on a team.”

Many gymnasts suffer injuries during their careers. Lena has unfortunately has experienced this as well.

“Eighth grade is when I suffered my first major injury,” said Buescher. “I fractured the growth plate in my knee, so I was out for the whole season and a little bit after that. And then I started recovering and I was training for my next level.  I then got a condition in my arm from overuse and I had to get surgery.  So then I was out for that season too and the recovery process was longer because of the two injuries.  I was pretty much out for two solid years.  Last year was really my first year back and I was still recovering. This year I started off healthy and I was competing in all four events.  Then I hurt my shoulder which was such a freak accident that I wasn’t expecting.  So started competing in floor and vault because that was what my injury limited me to.”

The Olympics are always a goal for aspiring gymnasts, but a very rarely a reality.

“When I was little, I really wanted to be in the Olympics and I thought 2016 was my year,” said Buescher. “Most gymnasts don’t actually pursue to be in the Olympics, even though a lot of people think they do. Most gymnasts try to do college because if you want to do the Olympics you have to be in Elite (a training program) and you have to drop out of school and be home-schooled and train six hours a day and then there are only five girls who actually make it on the team so it is kind of unrealistic that you’re going to make it.  It was always something I wanted to do, it just wasn’t realistic, so I started focussing of college gymnastics and getting to the highest level I could be at.”

Though gymnastics is a time consuming sport, Buescher’s family has been supportive all the way through.

“My family is very supportive,” said Buescher. “I’ve had to give up certain family trips and stay with one of my teammates which was hard.  You always want to be able to spend time with your family.  They have gone through it for so many years and they are used to it now.”

With Buescher’s team being present since she started gymnastics, she notes the strong relationship that have been built throughout the years.

“Nobody else really understands,” said Buescher. “They can try but nobody knows what we go through as a team or how the training affects our lives.  I spend more time with them than I do with my family. We have all been together since we were three-years-old.  We have known each other for so long so we are more of a family.  It sounds really cheesy, but honestly we all really know each other and we get along really well.  It’s great to have these solid friendships with so many girls who know you so well. Alot of people struggle to find that.  I know I have my team and that we’ll all always be friends. They are my support system.”