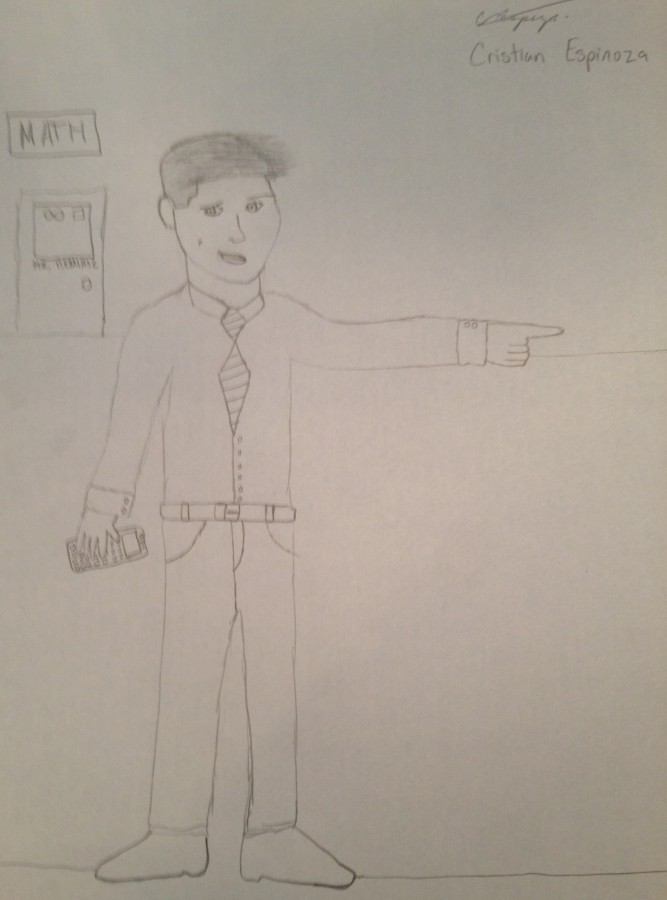 Walking into a class usually doesn’t give students the best feeling. At Jones, students are overloaded with rigorous class work and can find it a struggle. However, there is one teacher that provides student not only the heavy workload, but showcases many of his “quirky” and “somewhat odd” teaching styles.

John A. Remiasz is a math teacher who makes this struggle somewhat bearable for many students. Remiasz combines his amusing characteristics with the math content to help his students produce positive results. Most importantly to him, it not only gets students the preferred scores, but teaches them how to think and learn as a group.

“Coming into a class with people who were all the smartest person at their middle school can be tough. But, people have to use each other’s intelligent minds as resources rather than being threatened,” said Remiasz.

The key to success is that simple in his eyes; teamwork is the only way to fully triumph as a unit.

“That’s the way he motivates us,” stated Brayan Rico ‘16. “We feel like we’re apart of a team and that makes us not want to be behind so we don’t fail our teammates.”

Rolando Alvarado ‘16 agrees. “That’s my favorite thing about him. He does his best to make sure that everyone is working cooperatively, because he realizes that there’s nothing that we can grow more from than problem solving with Chicago’s most intelligent students.”

His emphasis on teamwork isn’t the only reason that his classrooms succeed, however. Many students comment on his exuberant personality that he often showcases in his interactions with the class.

When a student walks into a math class, they are usually filled with dread. But Remiasz immediately dismisses any sense of discomfort by cracking jokes in what can sometimes be the most critical moments.

In the midst of a unit test, Remiasz will give students friendly reminders of different concepts they’ve learned throughout the year.

“Trying to contain infinity is like trying to contain Mr. Remiasz on the dance floor,” he’ll shout with a grin covering his face from cheek to cheek, shaking his hips in what could be the worst display of rhythm ever. Students let out a short chuckle before realizing that they have a test to take, and quickly scramble back to finishing their problems.

“I just like to keep the class fun,” said Remiasz. “We have to be here for an hour and thirty minutes, so I want to keep our energy up.”

“He has the ability to liven up a weary audience with perfectly executed dry humor.” said Alvarado.

Rico shares this viewpoint. “He makes the class entertaining even though the material isn’t.”

Who Remiasz is outside of the classroom can be surprising to some.

“I used to play football and run track back in my high school days,” said Remiasz. “But nowadays I’m mainly concerned with work and family. Whenever I get time off I go running and biking.”

Whether a student loves or hates math they can always agree that they like Remiasz. He brings out the best in the students he teaches.

“He’s my favorite math teacher because he pushes everyone to do their very best,” said Sonali Chadha ‘16.

Alvarado has high praise for him as well. “Mr. Remiasz is just a great guy with an even greater heart.”

Remiasz strives to create and maintain a supportive atmosphere within his classes. Though he teaches some of the most rigorous courses at Jones, he balances the seriousness of the academic content with convenient humor, making him one of the preferred and favorite math teacher at Jones.