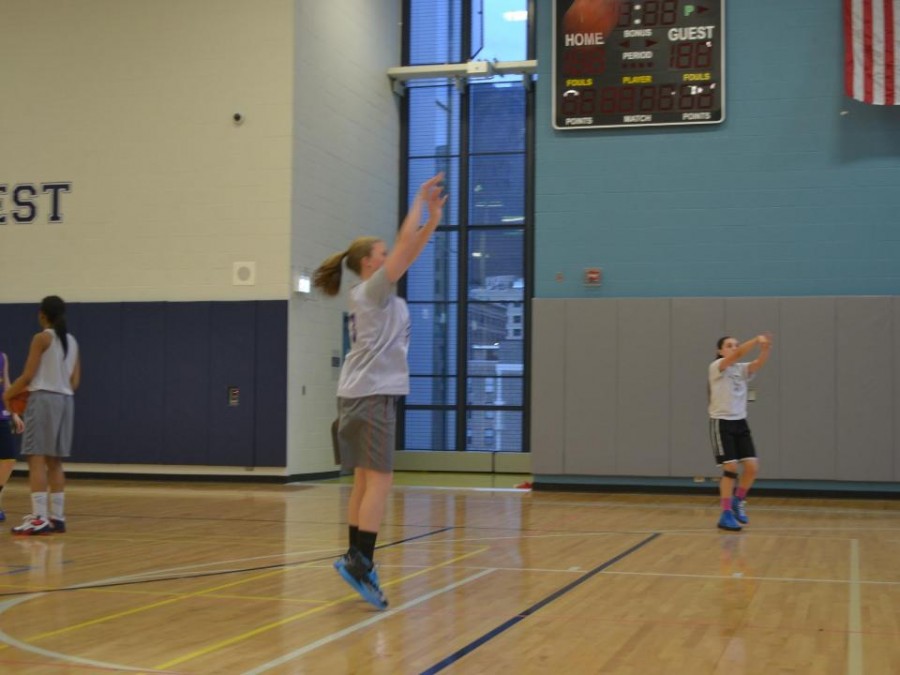 Going undefeated in their conference in the 2013 winter season, the Lady Eagles enter the Red Conference, which is highest conference of Girls’ Basketball.

In preparation for the 2014-2015 season, the girls have been conditioning since the beginning of September. “We are focused on maintaining our spot in the top conference” says Coach Michael Strok’05.

The Lady Eagles aim to once again be undefeated in their conference, as they will face Kenwood, Philips, Bogan, and Dusable. Strok said, “I feel like the team has it. We have all but one of our starters, so the chemistry is there.”

The Lady Eagles have been practicing in the gym everyday and are determined to open up their season with a victory.

Beginning in 2001, The Jones Bowling team was created to provide students another venue by which they can enjoy their time. Since then, it has gone from leisure extracurricular to an intensely competitive sport.

Coach Frank Menzies said, “We have been North Center Section Champions multiple years in a row.” From prior victories, the bowling team seems to be serious as they head to this 2014-2015 season. Bowler Isaiah Fernandez ‘16 would agree. “The highest possible score you can get is 300. It isn’t easy, but I am working on getting up to the 130s by showing up to the two practice days we have each week.”

Jones Bowling is known for sending individuals to the IHSA State Finals. Both boy’s and girl’s teams enter the CPS City Semi-finals and City Finals every year.

The sport continues to rise in popularity as more and more student enter the team. Bowlers this year are practicing at UIC bowling alley or Waveland Bowl, in order to keep their streak of entering City finals each year.

Being placed into CPS’ top division, the boys’ swim team are taking this season much more seriously.

Unlike last year, the boys will be having morning practices to shave time off their races. Swimmer Will Macellaio ‘16 said, “It [morning practice] needs to happen if we’re going to be competing with Lane, Whitney and Northside.”

In the 2013-2014 season, the sophomore lineup took 2nd place in City. The swim team is looking to repeat last season and are aiming for top five in city according to Captain Phil VanZale ‘15. “We [Varsity] are trying to create more of a bond.” VanZale believes that in order to be crowned in City, a strong bond within the team is necessary.

With a more rigorous organization this year, the swim team aims big as they practice everyday after school until 6 p.m

Dance Hopes for Another Successful Season

The team is hopeful for repeated success this season. However, changes in coaching staff could lead to a different outcome. “The only thing I have concerns with is the change in coaches. Ashley McIntosh [former coach] helped us get to where we went. We just don’t know with our new coach,” Coleman said.

Coleman assured everyone not to worry. New coach Yaasha Abraham is very qualified. “She does Brazilian, Colombian, and street dance. She doesn’t just coach schools but she coaches and teaches adults,” said Coleman.

With Athletic director and varsity head coach Frank Griseto at the helm, the boys’ Varsity Basketball Team looks to make their way through a newer and more competitive Blue Division. Squaring up against teams like Richards, Solorio, and Little Village, there are very few games in their schedule that will not be competitive.

Coming off an 8-2 conference record (maxpreps.com) in the Green North Conference, the boys are excited to be playing tighter, more rigorous games. “We like challenges. Obviously no one didn’t want to go to blue so we are happy for the challenge,” said forward Gabe Schwartz ‘15.

Griseto is confident in his teams abilities as well. “I think it’s going to be a lot tougher, the teams are really athletic [in our conference]. We have to be ready for the challenge and I think we will be.”