Gridlock: more space, more students, and one route to get between it all 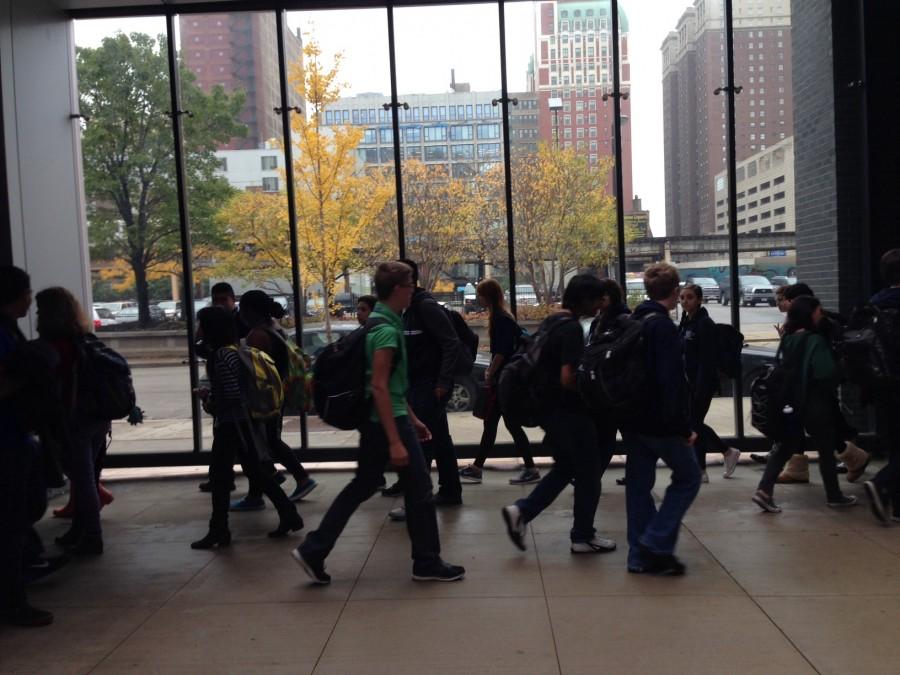 Students race through the new link to get to their classes.

Getting from class to class on a daily basis may have been easy for most Jones students when the school was housed in the north campus.  But these days are long gone, and so are the short commutes. With both the new south building and north building fully operational, students are finding it difficult to pass quickly through the two.  The new open link between the two buildings has created confusion for students and teachers alike.

“There is a lot of congestion. It’s really hard to be early to class and I have to run to the [new] link if I am going to the old building from the south building.  It takes five minutes just to get through,”  Luisa Bryan ‘17 said.

The congestion results in tardies and detentions.  Students just aren’t able to make the commute in 10 minutes.

“It’s made it harder to get to class on time.  I miss the first few minutes of class that contain important information,” Kelsey Kamin ‘18 said about getting from building to building.  The commute between the two buildings causes students to be late to class due to congestion.

“They make it work,” said physical education teacher Lauren Zillmer about students coming to her class on the seventh floor from high floors in the north building.  “I do experience kids being late to my class because of [the commute] by a couple of minutes.  I feel like they shouldn’t be late because they have extra time to get changed in P.E. classes along with the ten minute passing period.”

Administration has taken security precautions this year to ensure students’ safety.  They now have security and administration stationed in the new link to secure the two doors leading to the alley and State Street sidewalk.

“Congestion isn’t really a problem, it’s a security issue.  Students are letting students in come in the side door {on State St.] and it locks from the outside, so sometimes it doesn’t latch shut.  This means some students aren’t passing through security,” Assistant Principal Therese Plunkett said. “Students are also leaving through those doors and the problem is that anyone could grab the door as they leave and come in.”

Plunkett says that administration has taken security precautions by posting teachers and security during passing periods and at the beginning and end of the day.  She also hopes to add more security cameras.

Security has also felt the stress from the new link as students continue to let in other students from the state street sidewalk.

“It’s too congested during the passing periods.  What we’ve done is let the kids out of the north cafeteria a little earlier than the kids in the south cafeteria because the congested becomes fire hazard.”  Says security member Steve Golston.  He says that security has been watching the passing area between the two buildings, the courtyard, and the north lunchroom to ensure that everyone is staying safe.